About 600 protesters demanding the closure of Australian slaughterhouses have shut down a major intersection in the CBD.

The rally, organised by Animal Liberation Victoria, began on the steps of Parliament House about midday on Saturday, before hundreds marched down Bourke Street to occupy the intersection at Swanston Street. 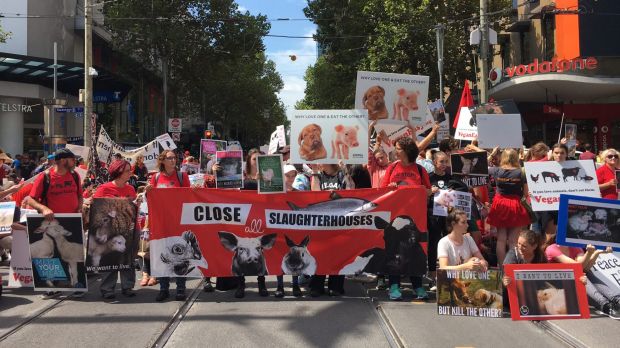 About 600 people walked through the city demanding the closure of Australian abattoirs.

Trams along Bourke Street were diverted while the march was underway.

Ms Mark said it was proof more and more people were turning to veganism after realising “the cruelty that goes on inside slaughterhouses across the country”.

She said a strong police presence was proof authorities were starting to take notice of animal rights activism.

“Things are starting to change for our organisation; we’re becoming a real threat to the industry,” she said.

Ms Mark said in late January he r house was raided by police who seized her laptop, documents and a camera in relation to ALV’s removal of two baby cows from a Laverton abattoir in 2015.

The rally was planned to “increase activism” and educate the community about the treatment of animals in abattoirs, she said..

After a “sit-in” at one end of the Bourke Street Mall, protesters marched up to Flinders Street station.

“I became a vegan six years ago but I didn’t do it overnight,” she said. “After watching an expose on the live-cattle trade to Indonesia, I realised there was no humane way to eat the byproducts of sentient beings who didn’t want to die.”

Yarra Trams was reporting minimal delays along routes 86 and 96 following the disruption.