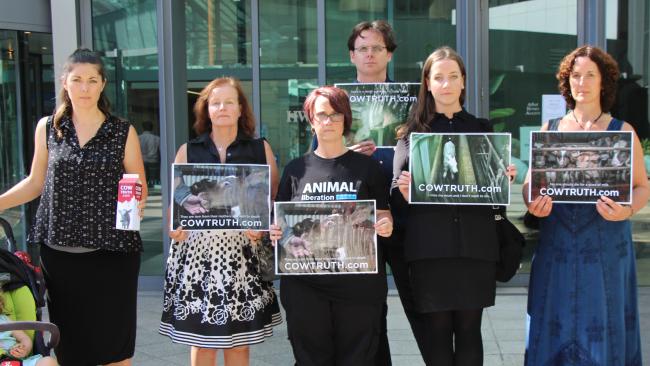 Police consulted with the peaceful protesters, but no activists were removed from the building.

About 15 of the activists have begun an ongoing “sit-in” protest in Dairy Australia’s reception area.

About 10 other activists are standing at the entrance to the building holding signs showing bobby calves being slaughtered.

The leading activists include two nursing mothers with their babies, who attempted to deliver milk cartons filled with artificial blood to the managing director of Dairy Australia, Ian Halliday.

Several Dairy Australia employees were unable to access their offices after the protest began at 10am due to a “lock down” at the building.

A Dairy Australia spokeswoman said the protest appeared to be an act to bolster the impact of a video posted on the animal rights group’s Facebook page earlier today.

The video depicted calves at a farm, in conditions the spokeswoman described as “normal practice”.

“I think they’re trying to make the footage out to be something it’s not,” the spokeswoman said.