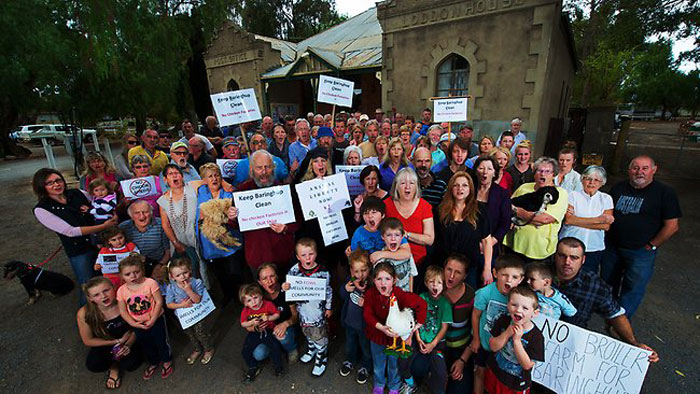 The industry produces $750 million worth of chickens annually and employs more than 10,000 people.

But the state’s share of national chicken production has fallen from almost 30 per cent to 22 per cent in the past three years.

Investment in new chicken sheds in farm zones has been blocked by residents who do not want the sheds next door.

In one extreme case, farmers have placed relocatable homes on adjacent land in what the chicken development’s owners claim is a deliberate effort to block their application.

The developer received 900 oppositions to the project despite the town having a population of just 370.

“Councils and VCAT (Victorian Civil and Administrative Tribunal) are not judging the applications on their merits but on the number of protesters,” Mr Bullen said.

He said Victoria had one to two years to fix the problem before big chicken processors may decide to move their factories interstate.

Two of the state’s biggest chicken farmers, who did not want their identities revealed, said most new investment was directed to South Australia, where planning laws for broiler sheds were less strict.

“We follow the law, we comply with everything even though it costs us years and lots of money and we still get refused,” one farmer said.

South Australia’s share of the national chicken meat industry has grown from eight to 13 per cent in six years.

Mr Bullen said Victoria needed 10 new farms producing a total of five million birds each year “just to keep up” with other states.

“We’ve had one farm approved in the last year, and that can take four years to get up,” Mr Bullen said,

Agriculture Minister Jaala Pulford said she was “well aware” of the challenges facing the industry and was meeting regularly with industry leaders to try to halt the chicken meat decline.

She said she was also aware of the “significant economic contribution the industry makes to growing rural and regional jobs and economies”.

“The Government is working with the industry to develop a strategy to address these challenges and expand within Victoria,” Ms Pulford said.

“The Government recognises the need to appropriately balance growing the industry with community and environmental concerns.”

Chicken farmers who want to expand have been squeezed out of once-popular outer metropolitan areas such as the Mornington Peninsula because of population pressure and have applied to move to farm zones in Gippsland and central Victoria.

At Baringhup, between Maryborough and Castlemaine, two chicken farms were approved by municipal council planning officers in the past year, but drew large community protests.

One project, which sought an expansion of the existing farm, was supported by Central Goldfields Shire Council, but lost at VCAT after an appeal by residents.

Another million-plus bird project 20km to the north was supported by council officers, but rejected by Mt Alexander Shire Council after 900 protests were received late last year.

VCAT is yet to decide on the appeal.

“There doesn’t appear to be a lot of jobs in them and they cause odour issues.

“There would be some parts of central Victoria, north of us, where they might not cause as much fuss.”

An 800,000-bird free-range broiler farm proposed for Toongabbie, near Heyfield in Gippsland, has also upset residents, with Wellington Shire Council yet to make a decision.

Mr Bullen said Victoria was an expensive place to do business. He said processors required farms to be located within one to two hours of their factories, which were mostly on Melbourne’s fringe.

“People keep saying go north … there’s a limit on how far north we can go,” he said.

Mr Bullen said a succession of governments had not supported his industry, but he was encouraged by the comments of Ms Pulford.

“We have been going north, where the politicians told us to go, and we still can’t get projects up,” he said.

“We need designated areas in Victoria where governments, local government and industry agree would be suitable for chicken farms.”