Police were called to a Lismore lake by duck hunters who feared a confrontation with protesters on the weekend. 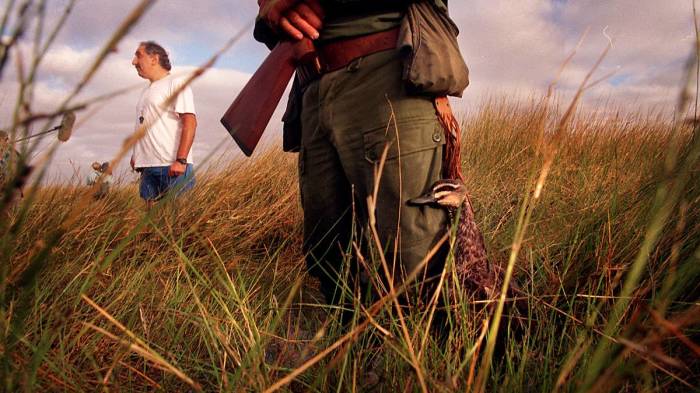 About 20 Animal Liberation Victoria (ALV) members arrived at Lake Tooliorook, south-west Lismore, before the opening of duck season at 7.20am Saturday.

There were about 50 shooters at the lake.

Sergeant Matt Laxton of Mortlake police said because Lake Tooliorook was classified as a lake reserve and not a state game reserve, protesters were able to take to the water in kayaks.

He said shooters were dotted around the lake behind hides, while individual or pairs of protesters, wearing ALV T-shirts and fluorescent vests and carrying whistles, took up positions immediately behind hunters.

Sergeant Laxton said other protesters took to the water in kayaks and took close-up photographs of the shooters.

He said the aim of the protesters was to disrupt the opening hours of duck season and most shooters hardly got off a shot.

“The opening of duck season was 7.20am and the hunters finished with a small collection of ducks,” Sergeant Laxton said.

“Police were notified by shooters because of the protesters’ behaviour. After we arrived everyone was very well behaved.”

Sergeant Laxton said there were verbal interactions between the shooters and protesters in kayaks and others who were taking close-up photos of shooters.

“Police were very impressed by the restraint shown by duck hunters,” he said.

“Most departed from the lake not having shot a duck. I’m sure the ALV members considered it a successful day.”

Two police officers stayed at the lake until the early afternoon, when the protesters departed back to Geelong and Melbourne.

Sergeant Laxton said relevant laws still applied under the Wildlife Act which prohibited protesters from harassing, intimidating or and interfering with hunters, but no infringement notices were issued.

Police and fisheries officers returned to the lake in the fog early yesterday but found no protesters or hunters. Sergeant Laxton said he understood protesters usually targeted Lake Connewarre, near Geelong, and it was a surprise ALV members went to Lismore.

“ALV does not telegraph or advise where they will be going. It’s understood they favour more direct action.

“Most left Melbourne about 2am to be in time for the opening of the duck season.”

“We saw just two ducks come down, but that’s two too many. There were probably others we didn’t see but on the whole it was a good day,” she said.

Acting Sergeant Sam Austin of Hamilton police said protesters video-recorded an incident at Lake Bullrush, where a shooter allegedly killed a protected duck, then tried to hide it.

“Rescuers found the duck and it’s alleged there was a threat made by the shooter in a foreign language,” he said.

“The rescuers are going to get a translation of the video and that information may be provided to police.”