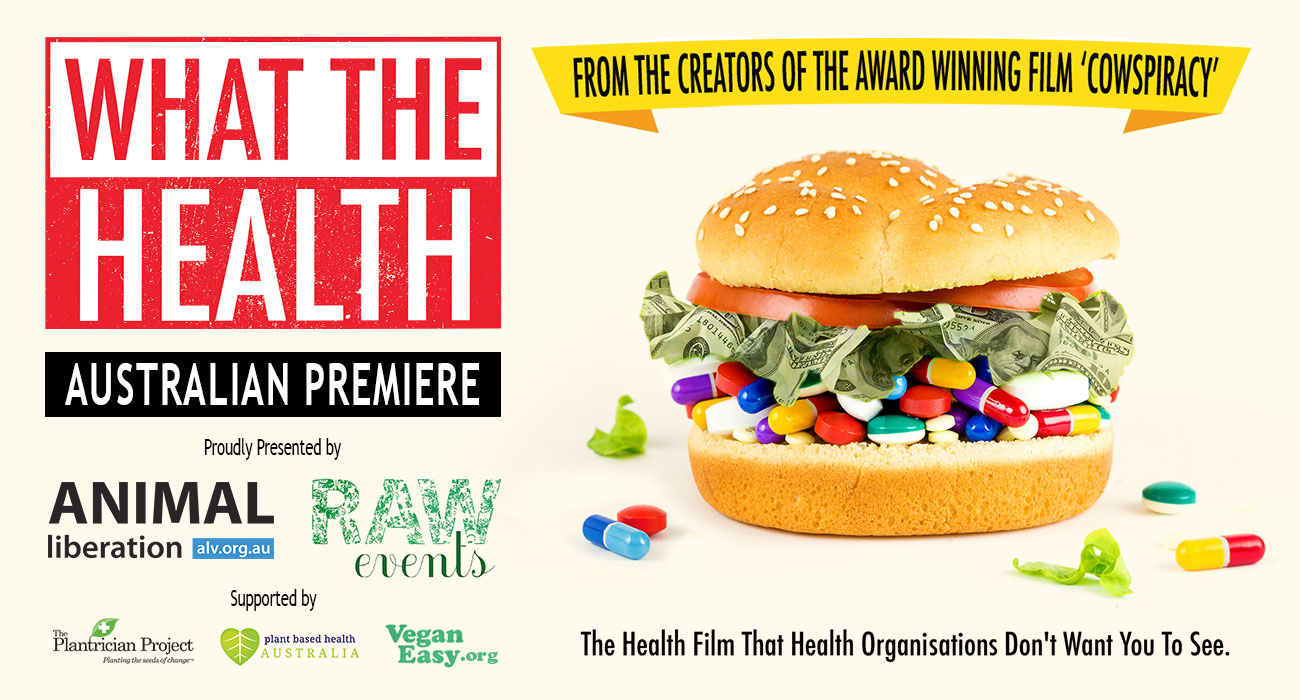 UPDATE: The Australian premiere of What The Health was an incredible success. Thank you so much to everyone who attended. Nearly 1,000 of you filled the iconic Astor to see this life changing documentary that uncovers the negative impacts of animal foods. Please visit our photo album here to see some images of the night.

Here’s your chance to attend the Australian première of What the Health, the new film from the creators of Cowspiracy.

Follow the revelatory journey of intrepid filmmaker, Kip Andersen as he uncovers the deleterious impacts of highly processed industrial animal foods on our personal health and wider community. The deeper Kip investigates, the more he becomes concerned… Why would leading health organisations still continue to promote such industries despite countless medical studies and research demonstrating the harm they cause?

This is the health film that health organisations don’t want you to see.

Off the back of hosting the sold-out Australian première of Cowspiracy, Animal Liberation Victoria are joining with Raw Events Australia to bring What The Health to The Astor Theatre in St Kilda. This iconic art deco, wide-screen cinema will provide the backdrop to a night of entertainment, enlightenment and the opportunity to enjoy the future of cinema dining with delicious offerings from some of Melbourne’s best cruelty-free caterers.

Dinner meals need to be pre-ordered online (cut off for orders 48 hours prior to event) for pick-up upon arrival at The Astor Theatre. A selection of snacks, desserts and non-alcoholic drinks will be available for purchase on the night.

Visit tix.yt/health to order your meal and tickets »

Following the documentary screening, Australian medical practitioners will share their thoughts on the film in a Panel Discussion and Q&A:

Andrew Davies graduated in medicine from the University of Melbourne in 1989 and began his medical career as an intensive care specialist soon after.

As an accomplished researcher who has been widely published in leading medical journals, Andrew has presented on international and local stages alike. Nearly 1000 Australians had the pleasure to listen to Andrew share his story of transition to a plant-based diet in Melbourne and Sydney earlier this month as part of the Living The Plantpower Way tour with vegan ultra-endurance athlete and podcaster Rich Roll.

An episode of burnout in 2012 saw Dr Davies leave his coveted position at a leading public hospital and take a break from clinical medicine and research for a year.

What followed was a time of deep reflection – time that enabled him to explore the framework for his overworked lifestyle and refocus on mindfulness, exercise, plant-based nutrition, optimal sleep and greater connection with family and friends. Now a part-time intensive care doctor and medical advisor in the healthcare industry, Andrew has also trained for and completed 3 marathons and 2 5km ocean swimming events as a plant-based athlete.

Andrew and his wife Claire, a nurse, have recently founded the New Normal Project to help share the importance of healthier lifestyle choices. Andrew has also just launched his own podcast, Mastering Intensive Care, where the wisdom and experience of leaders in intensive care units are explored in greater depth and can be shared throughout the medical and wider community.

Dr Malcolm Mackay is a General Practitioner and nutritionist. He relocated from Adelaide to Melbourne in 2012 and is currently working at the Clinicare practice in Smith St, Fitzroy.

Malcolm’s personal and professional exploration of the field of plant-based nutrition began in medical school 35 years ago. He has a special interest in preventing, treating and reversing chronic disease with a whole foods, plant-based diet. In recent years, Dr Mackay has connected with the plant-based nutrition movement and leading practitioners in the USA, attending annual overseas conferences on the topic.

Together, they are running a nutrition seminar on this Sunday April 2nd, and have kindly donated one attendance place as part of tonight’s fundraising raffle.

Despina is Monash Medical graduate and Fellow of the Royal Australian College of Physicians. She has been a practicing medical oncologist since 2010, both in the private and public sector. In 2012, Despina completed her research higher degree (MD) in the molecular pathogenesis of ovarian cancer and melanoma via the University of Melbourne and Peter MacCallum Cancer Centre.

Despina’s interest in the interaction between diet and chronic disease commenced after adopting a vegan lifestyle due to an acute awareness of the treatment of animals in the food sector. One of her professional goals is to create awareness within health institutions by re-emphasising the role of diet in disease and encourage hospital food service providers to generate menus that promote healthfulness and disease prevention.

Renae is a qualified medical doctor (MBBS, with honours) with undergraduate studies in exercise physiology and nutrition. In addition, she has completed Dr McDougall’s Starch Solution certification and his course in Dietary Therapy, volunteers as a medical moderator at nutritionfacts.org, and is a regular attendee at international conferences on plant-based nutritional medicine. In 2016, she completed a six week internship in medically-supervised water-fasting and dietary therapy at TrueNorth Health Centre in California, under Dr Michael Klaper and Alan Goldhammer.

Renae’s main career goal is to strike a balance between modern/Western medicine and the power of diet and lifestyle, to create a holistic approach to optimal wellbeing and longevity.

A former Australian gymnastics champion, with four marathons, and five top-two placings as a fitness competitor, Renae maintains a keen interest in fitness, enjoying cycling, weight-lifting, swimming, and yoga on a regular basis.

Ash is a clinical neuropsychologist and change specialist. She helps people re-train their brain to live happy, healthy, and fulfilling lives. She is passionate about promoting the vegan lifestyle by supporting people to break old habits and overcome the mental obstacles that can interfere with their transition. Ash is a strong advocate for positive mental health, particularly in the vegan community. Over the last fifteen years, she has been working in private practice as well as across some of the largest hospitals in Melbourne.

Your Ticket Contributes to Vegan Education

Funds raised from this première will go towards assisting Animal Liberation Victoria and the Plantrician Project with their not-for-profit advocacy to encourage the uptake of a plant-based lifestyle in the medical and general community.

Visit tix.yt/health to secure your tickets »