The world's largest land-based wildlife slaughter is happening to Australia’s iconic kangaroos, considered a pest on the land they have lived in for over 20 million years.

The world's largest land-based wildlife slaughter is happening to Australia’s iconic kangaroos, considered a pest on the land they have lived in for over 20 million years.

above: photo by Jeremy Bezanger, Unsplash

Unlike most animals who are exploited for food, kangaroos are not fenced into paddocks, or inside sheds, they are killed in the wild, under the cover of darkness. This may appeal to people as a more ‘natural’ or ‘humane’ method of killing, however, the reality is anything but. 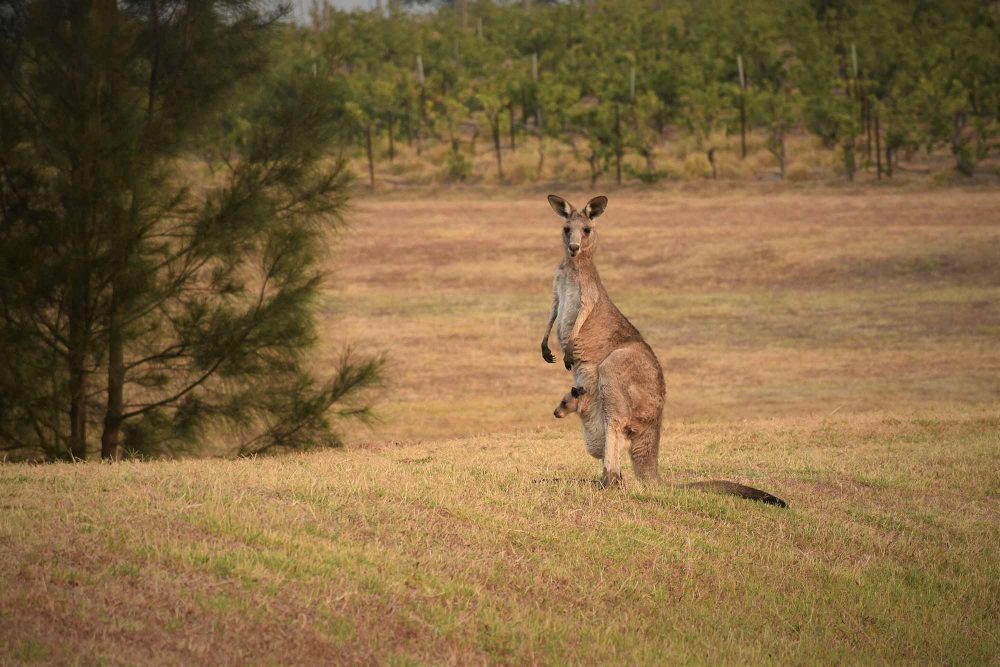 above: photo by Mark Stoop, Unsplash

Commercial kangaroo shooters must adhere to The National Code of Practice for the Humane Shooting of Kangaroos and Wallabies for Commercial Purposes.

This National Code of Practice states that harvesters must aim to hit the target kangaroo in the head, only when they are clearly visible, stationary and standing upright.  However, human error dictates that even highly experienced shooters will not hit their target correctly 100% of the time, especially in the dark.

As a result of this, kangaroos who have been maimed are unlikely to be found as they will try to hop away and as a result, will die a slow, painful death.

The same fate occurs for joeys at-foot, whose mothers have either been shot and killed, or are suffering from painful wounds and can no longer provide them with adequate care.

Neither instant death via a gunshot to the brain, nor long, intense suffering from wounds are humane or ethical ways to treat any animal, let alone kangaroos who have called Australia home for over 20 million years. 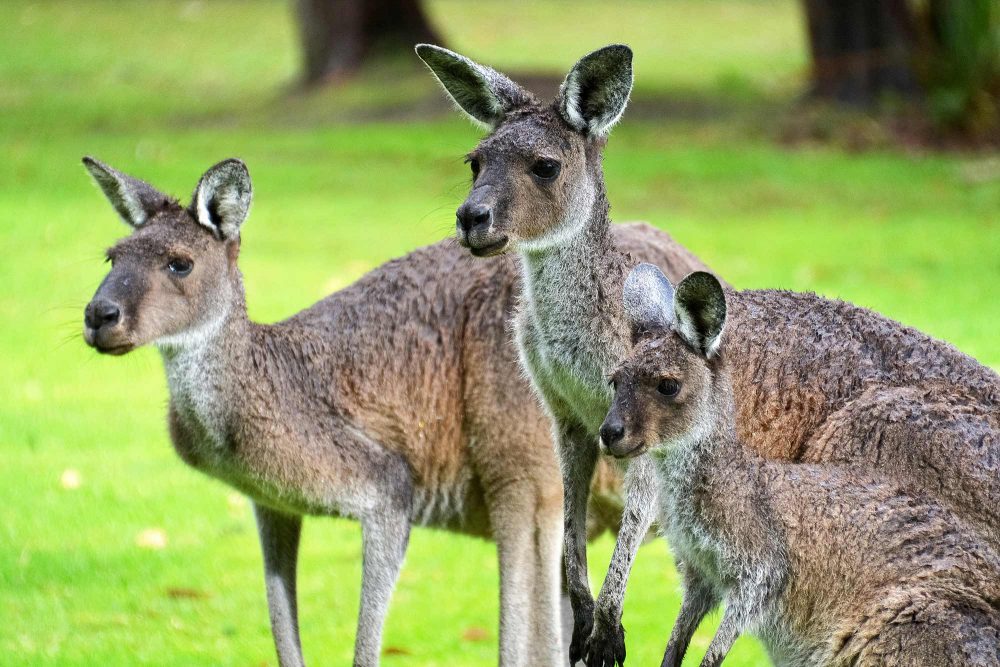 Joeys are a Waste Product of the Kangaroo Industry

Joeys are of no use to the industry and are considered a waste product. The National Code of Practice does not prevent shooters from killing female kangaroos, whether they have any dependent joeys or not. 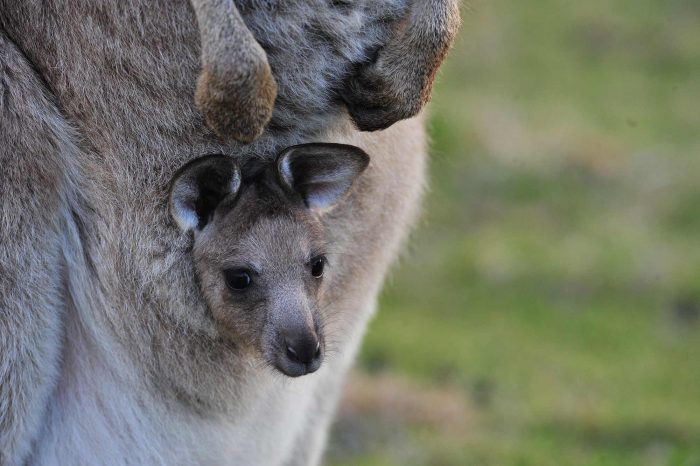 When female kangaroos are killed or injured, they often have young joeys in their pouch, or at-foot. The shooter must check the pouch for any joeys, and then proceed to ‘humanely’ euthanise them via the following ‘suitable’ methods: 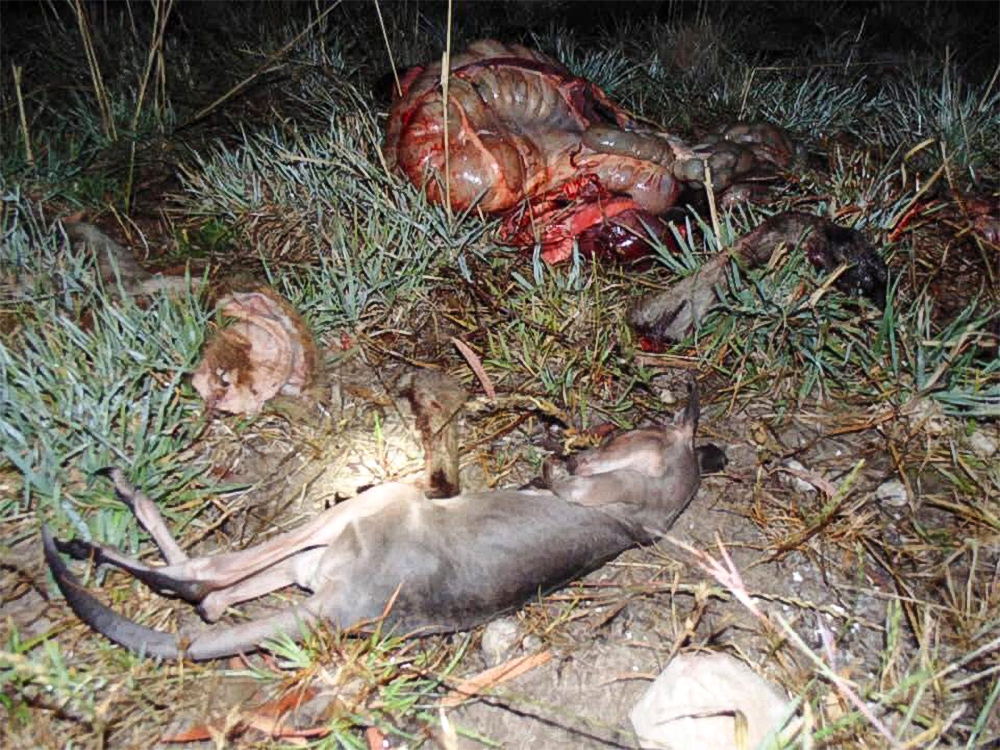 A velvet joey laying dead next to the entrails of it’s mother. credit: Kangaroos Alive 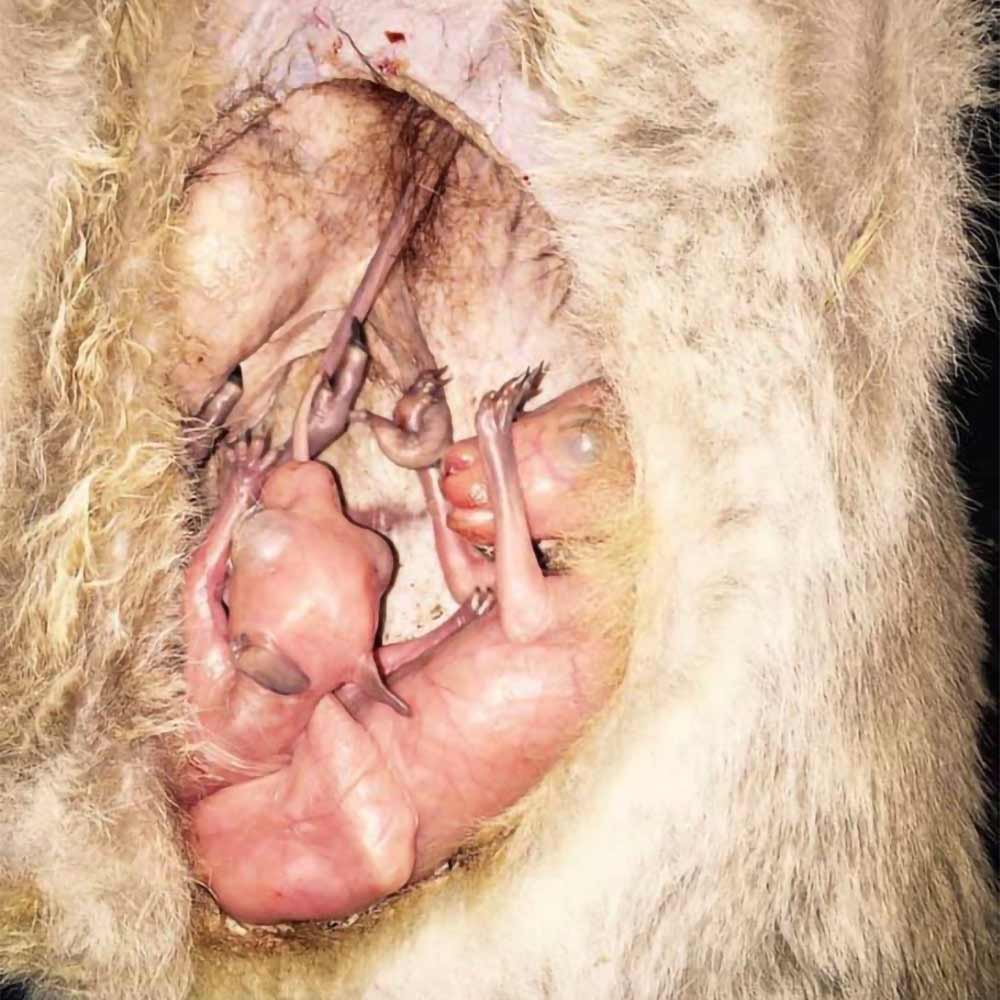 Twin joeys found in their dead mothers pouch on the back of a shooters ute. 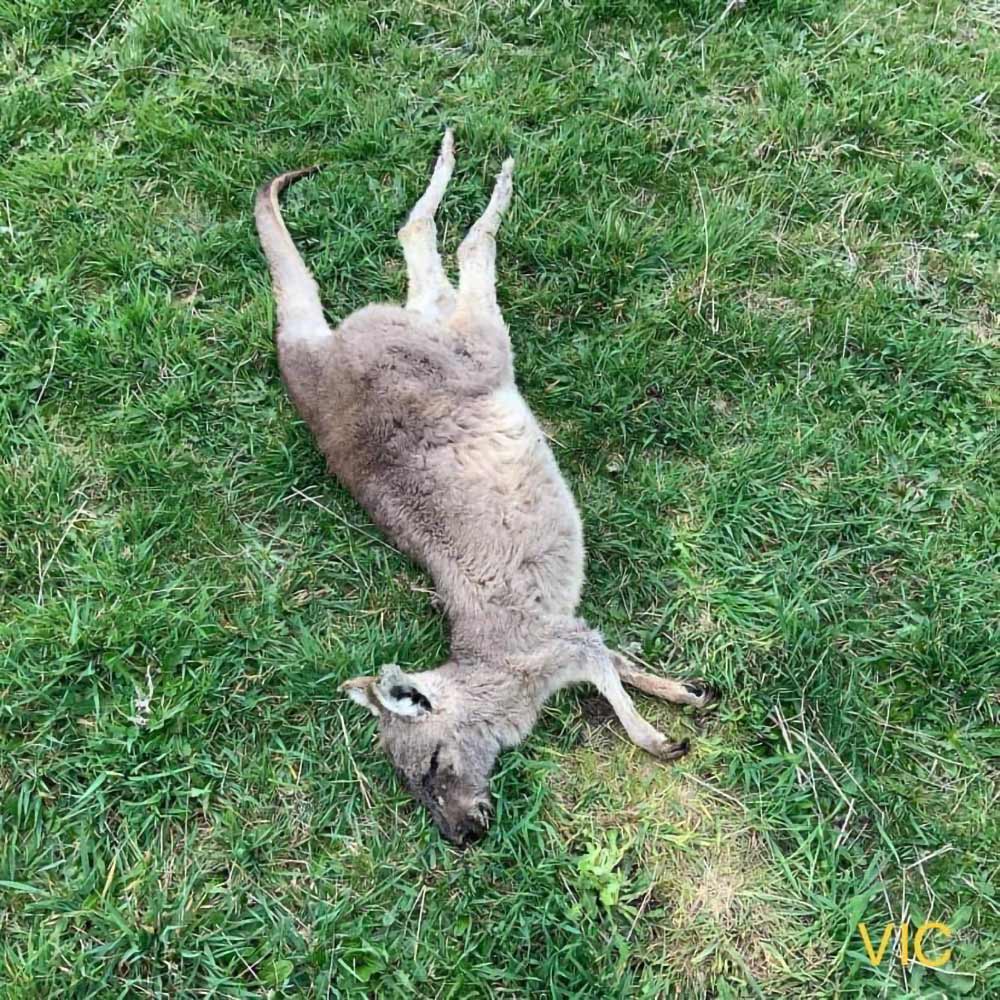 There is no proficiency test for ‘joey bashing’, with the National Code of Practice itself stating that “the efficiency and humaneness of this method depends on the operators skill and determination”. This statement highlights the Australian government’s clear lack of empathy and concern for the suffering of native, Australian wildlife. There is no humane way to kill any animal who has the will to live.

Also disturbing, is that joeys who are at-foot, will likely try to run away and end up suffering a long and painful death, either from starvation, exposure or predation.

Kangaroos can only raise one joey to full independence each year, and given the high mortality rate for juvenile kangaroos in their first year of life as well as environmental conditions such as drought, the growth rate of kangaroo populations is very gradual. There is simply no need for the slaughter of kangaroos, which is only causing unnecessary harm and further hindering their already slow level of growth.

“We see the limbs hanging ragged, the swollen infected, bloated faces and bodies from embedded bullets.” 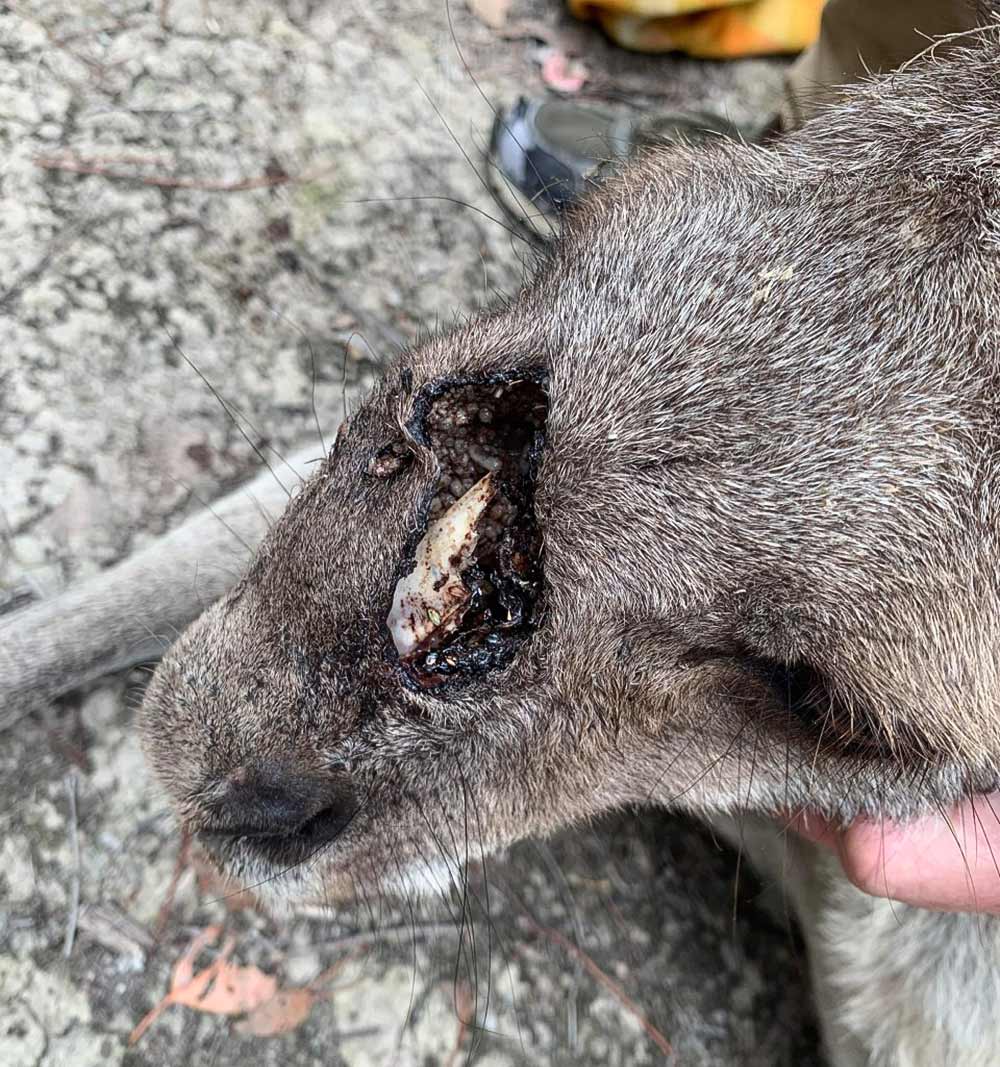 “We witness the mother unable to tend to her pouch joey who eventually dies as a result of her no longer able to bend from the traumatic gunshot wounds sustained to her neck.” 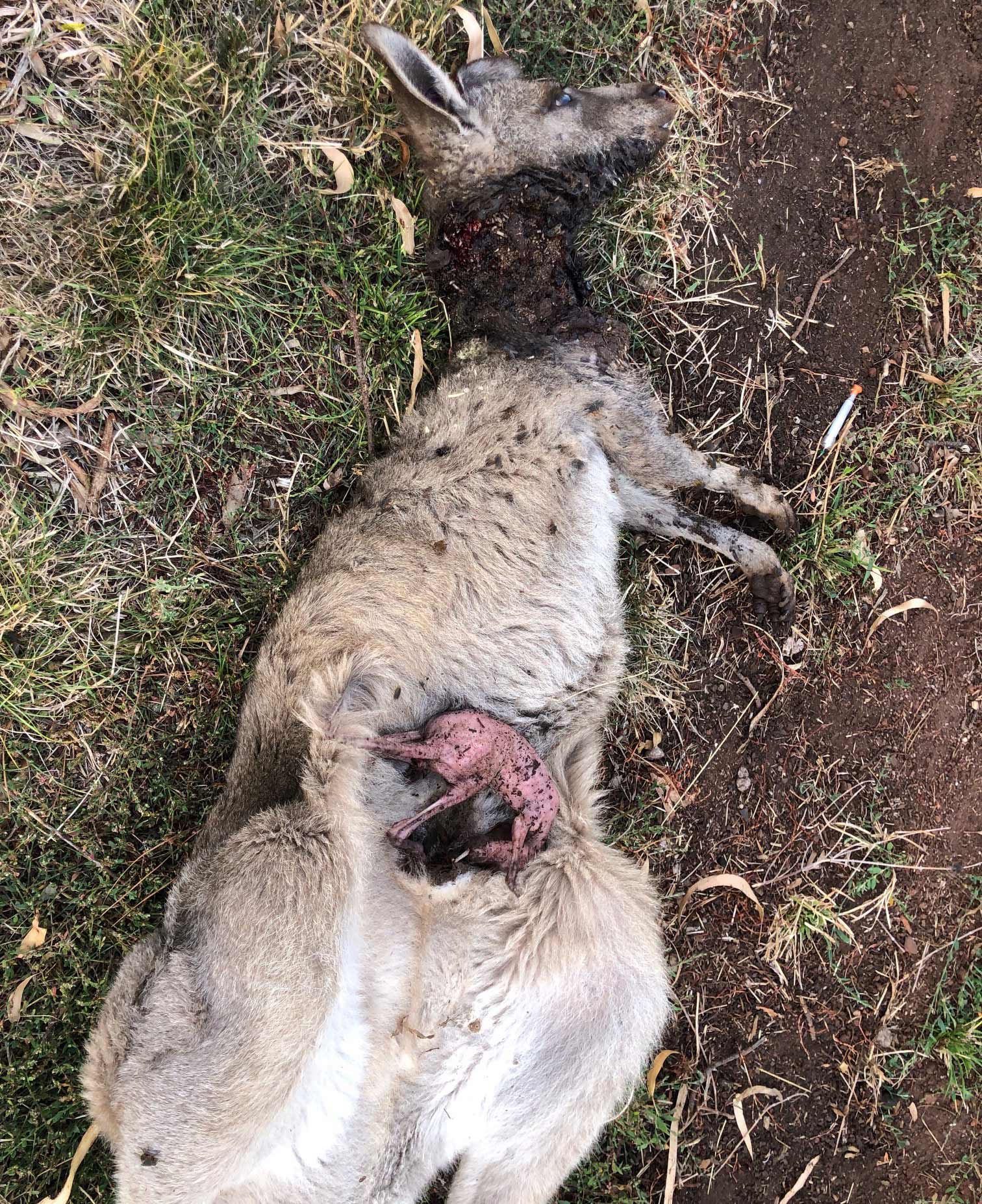 “It’s tough enough being a volunteer wildlife rescuer without the additional burden of attending to kangaroos that have been maimed and mutilated by bullet wounds. Finding them with some of the most horrific wounds imaginable.” 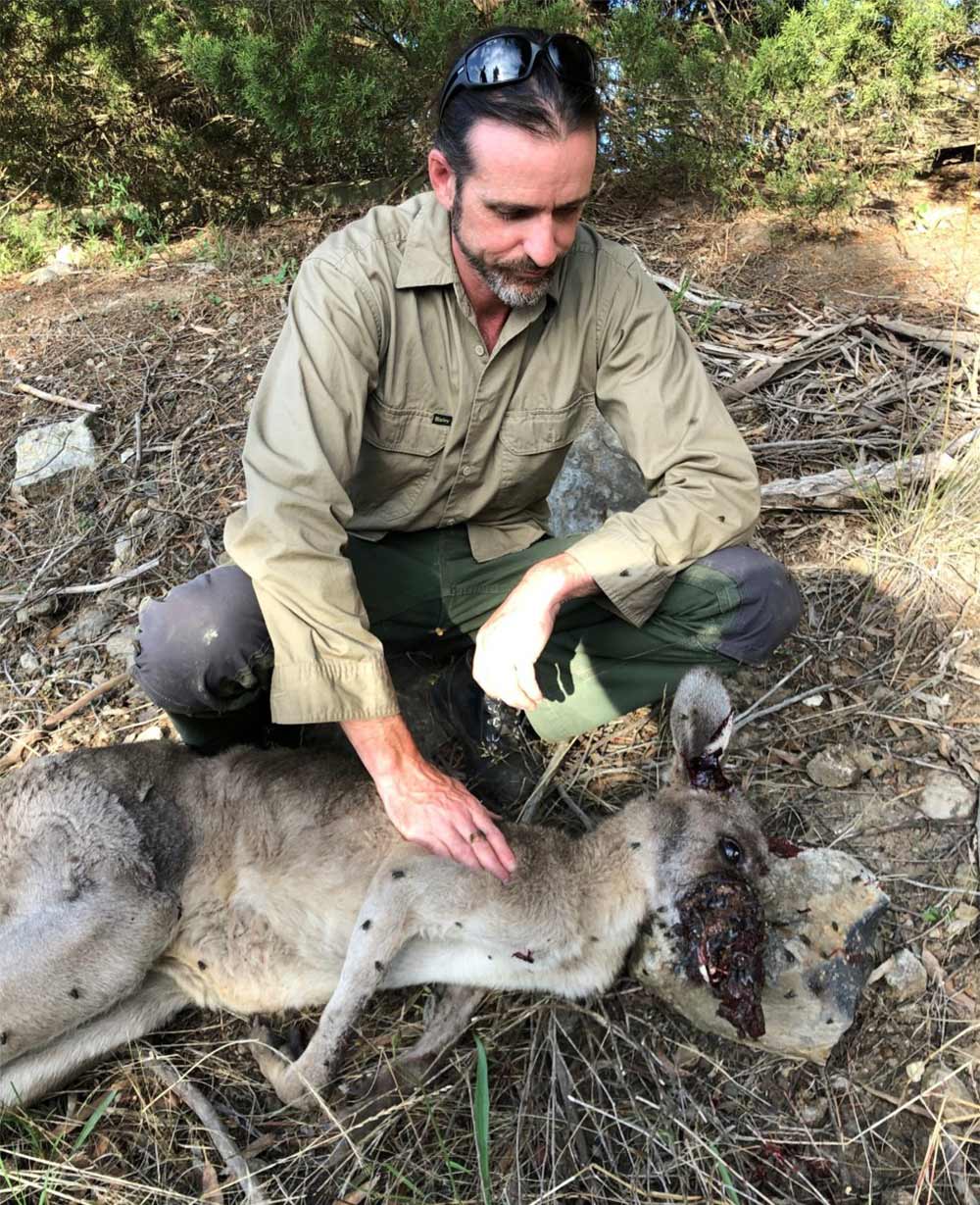 Glen Cottier with a kangaroo who was shot in the face. Gisborne Vic January 2020. credit: Sue Anderson

An accurate estimate on the population of kangaroos in Australia is difficult to determine.

Expert biostatistician Clare Galea found the methodology used to estimate kangaroo numbers in Victoria to be very flawed, producing inaccurate results that the Victorian government have used to justify increasing the commercial kangaroo shooting allowance from 95,680 in 2021, up to 127,850 for 2022.

The considerations for commercial shooting do not include the millions of kangaroos killed non-commercially, either illegally or by landowners. Thus, the commercial shooting quotas are based on an unrealistic estimate of the kangaroo population.   Even if estimates were correct, the genuine population growth rates of kangaroos are exceeded by the shooting quotas of 15-20% or more in all states (except Victoria, which is 10%).

In Victoria alone, the scarcity of kangaroos is reflected in the hundreds of posts found in Victorian Facebook community groups by Victorian Kangaroo Alliance, with shooters desperately seeking out properties where kangaroos are still present.

Shooters commonly involve children in their hunting expeditions, which desensitizes them to animal abuse and makes it more likely that they will commit similar acts as adults.

The following images were obtained from the @kangarootruth Facebook page. 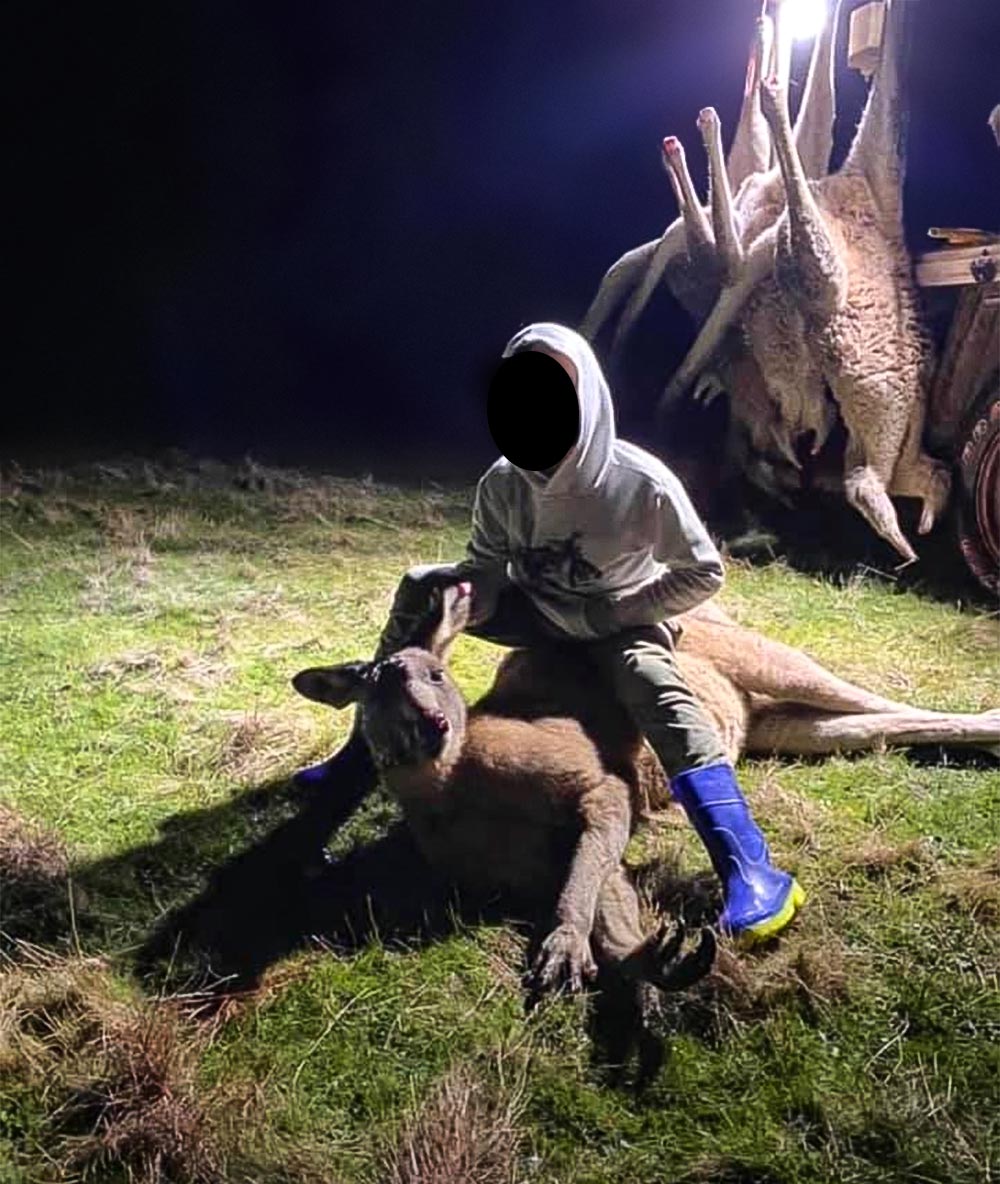 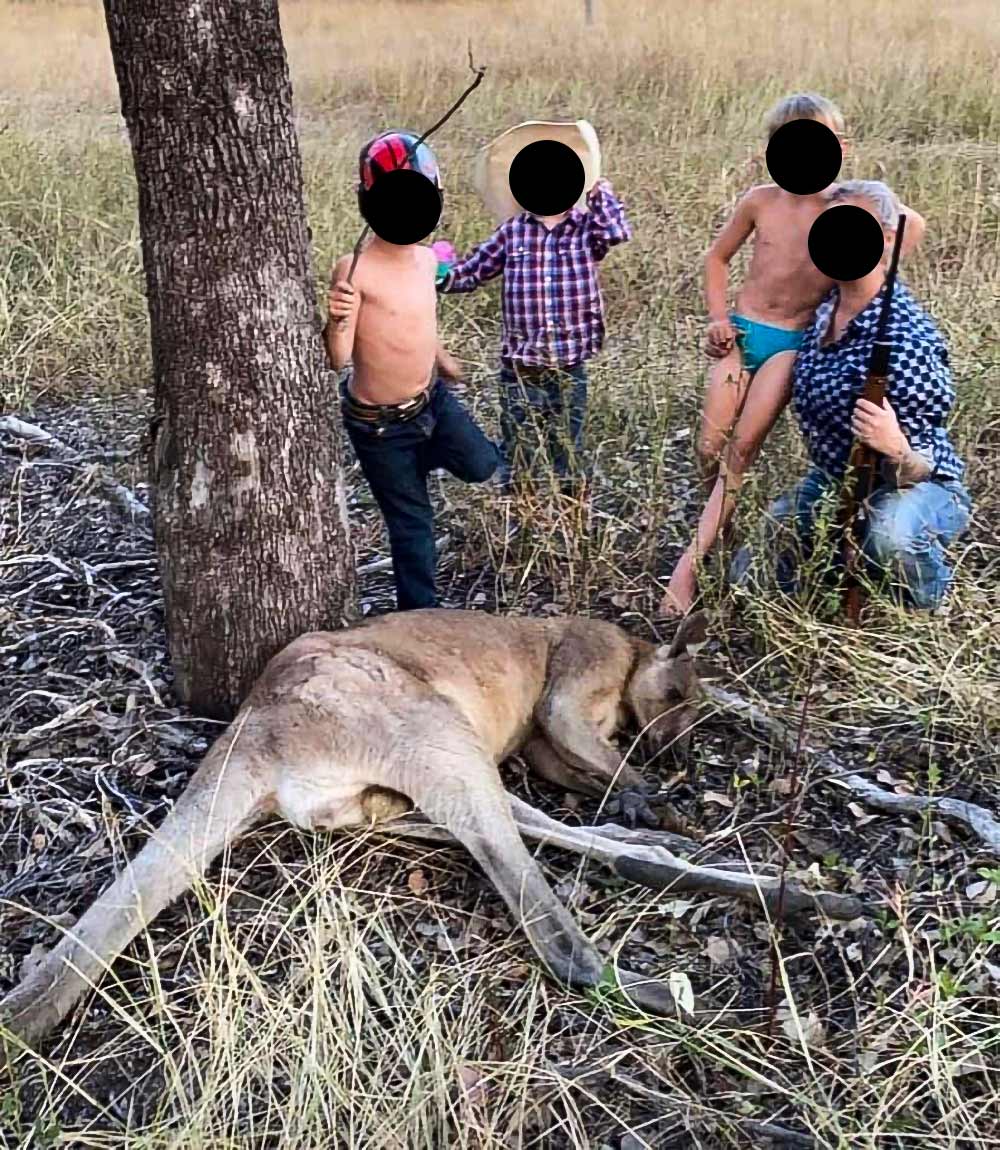 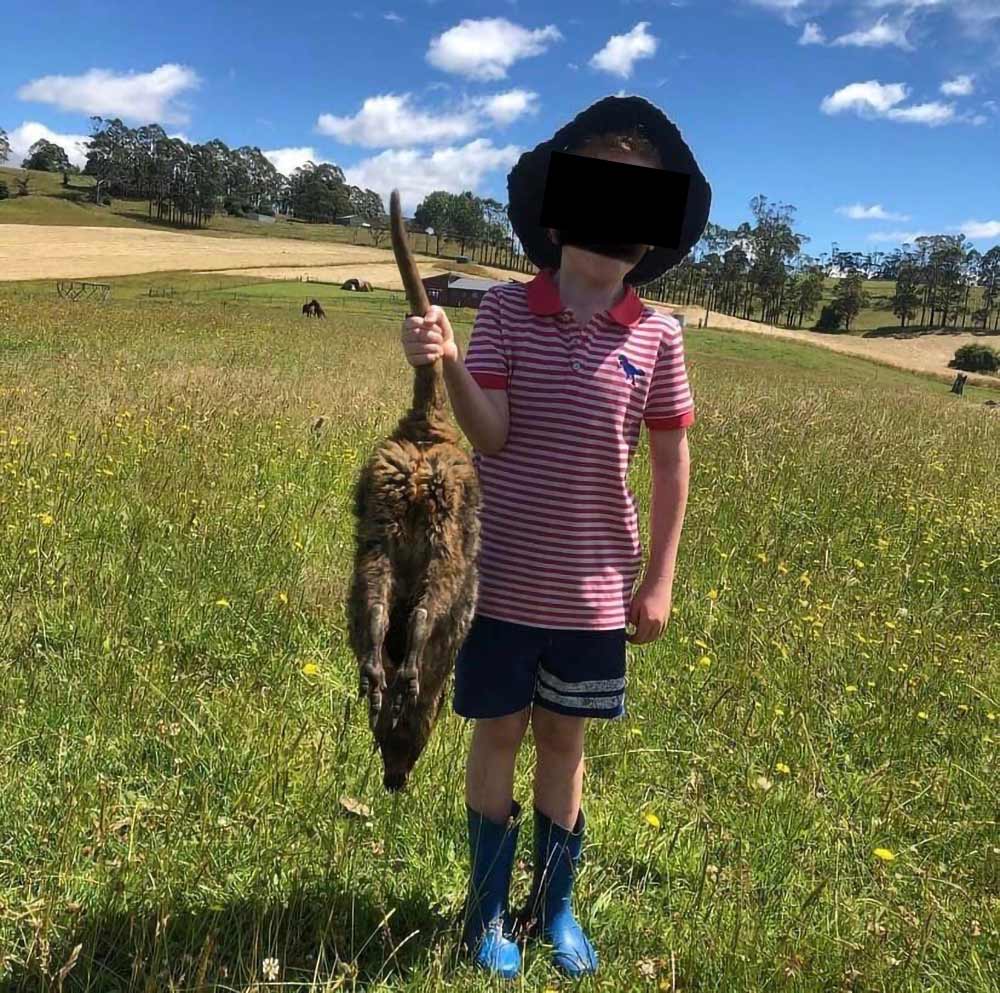 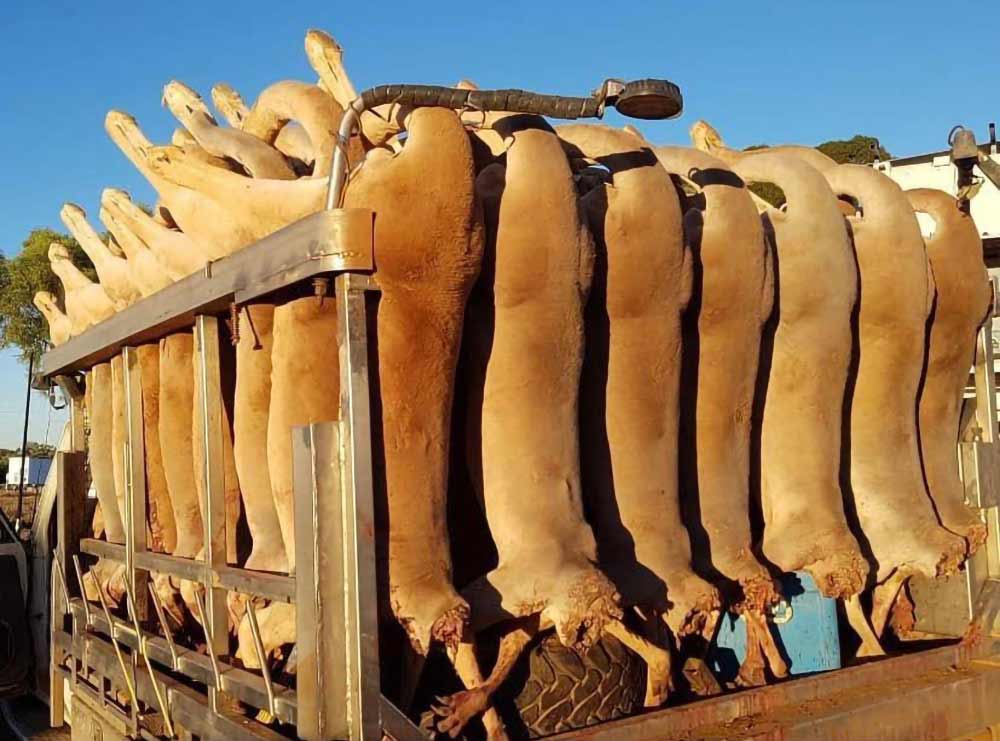 The intensive handling of kangaroo carcasses could well be a breeding ground for yet another zoonotic disease.

After being killed, kangaroos are collected from the field, hung by their leg on the shooters ute, and stabbed in the neck to bleed out. After the head, limbs and organs are removed, the kangaroos are compiled together and their open carcasses are exposed to the elements including high temperatures, faeces and insects.

The guidelines allow for kangaroo carcasses to be returned to field depots within two hours after sunrise, regardless of the temperature. Once their bodies are hung up in the field depots, they can be there for up to two weeks, with various other wild species.

These unsanitary conditions result in a high incidence of pathogens such as salmonella, parasites, toxoplasmosis and e-coli in kangaroo meat. This has lead to the banning of kangaroo meat imports and ‘products’ being removed from shelves across the globe.

The following quotes are from Aunty Ro Mudyin Godwin, who spoke up for kangaroos at the Parliamentary Inquiry into the Health and Wellbeing of Kangaroos and Other Macropods in New South Wales.

Aunty Ro’s family totem is the kangaroo. A totem is a plant, animal or other object that is believed to be ancestrally related to a person.

Aunty Ro likens the slaughter of kangaroos to:

“To see the very government that governs this stolen land under the coat of arms, the kangaroo and the emu, profit from the commercial slaughter of kangaroos like some sort of trophy exemplifies blatant and obnoxious colonialism.”

“The commercial industry is a profit-driven industry. If the Government needs to adopt anything it is: Just stop killing them.”

“If we are to move forward in any way, shape or form we have got to coexist. This has got to stop. This slaughter has got to stop. It flies in the face of Indigenous culture. It is a profit-driven industry and it just has to stop.”

How you can Help 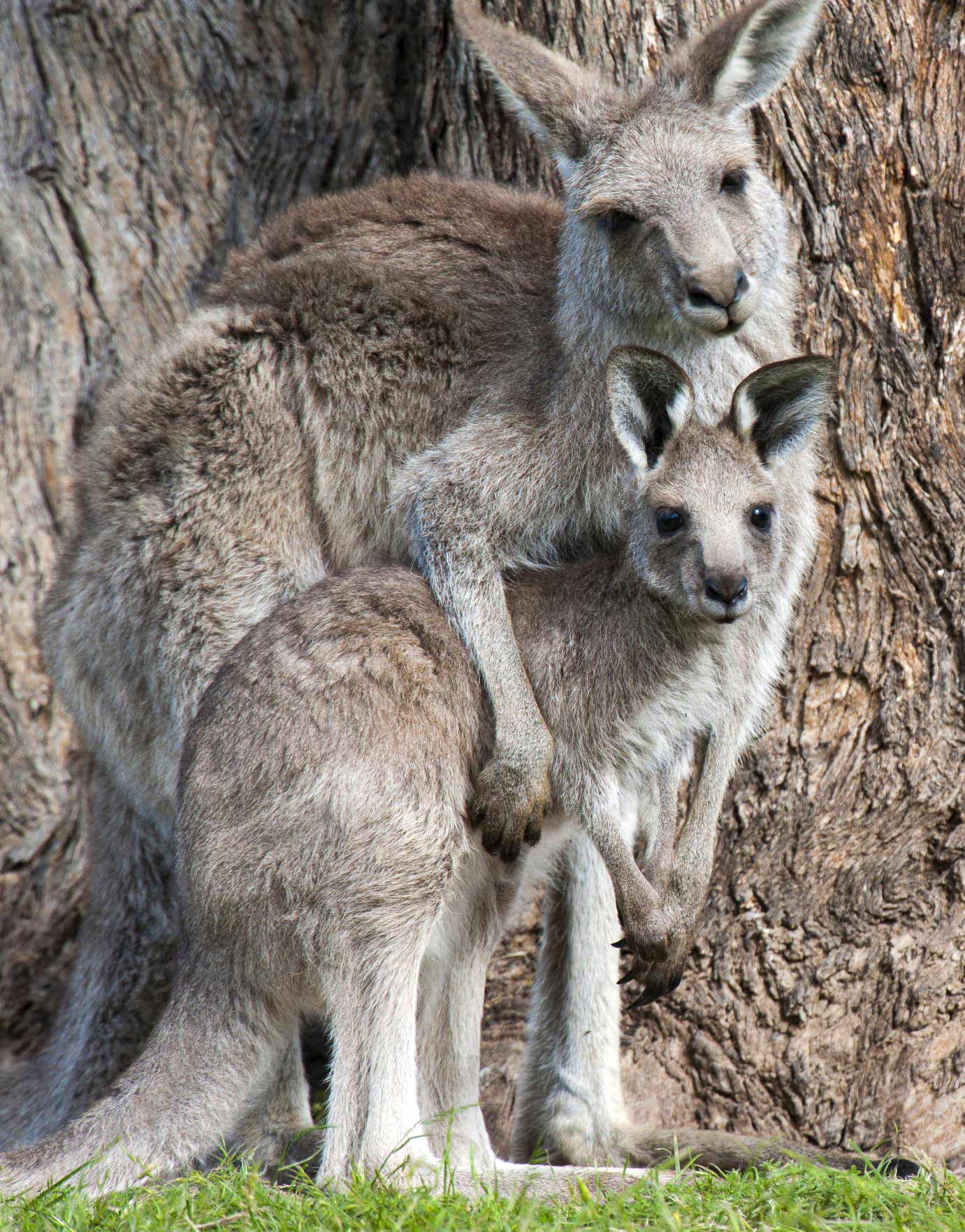 Exploitation of any animal is never ethical. Living vegan is the most important thing we can do for all animals. Head to Vegan Easy to find out more and take the 30 Day Vegan Easy Challenge.

Spend some time reading research from websites such as:

Talk with your friends, family, colleagues and neighbours about what you have learned.

4 Help out at a sanctuary.

Locate your nearest wildlife sanctuary and see what assistance they may need (social media can help with this).

5 Write to your local representative.

Write to your local parliamentary (both state and federal) representative asking that they support kangaroos and work towards ending the exploitation and persecution of kangaroos in your area. Remember to be polite and cite your references so they will take you seriously.

Use social media to boost articles and network with those campaigning to bring kangaroo killing to an end.

There are many petitions online that you can support such as:

Note: Links in this article to external organisations should not be interpreted as endorsement of their views. ALV promotes a vegan abolitionist perspective, which means we believe in ending the property status of animals and not merely regulating it. See Our Mission page for more information. 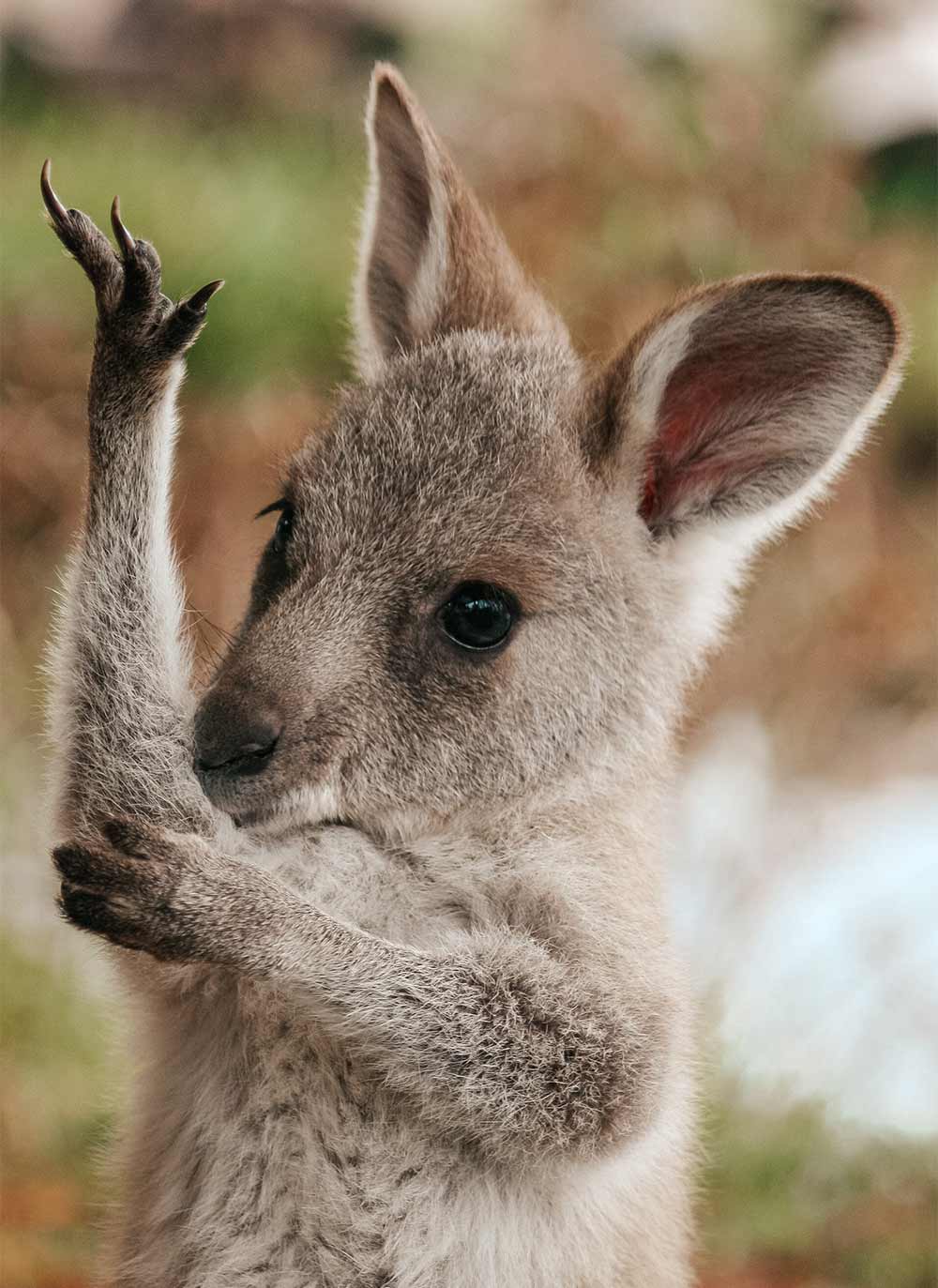 Special thanks to Alyssa Wormald from the Victorian Kangaroo Alliance for assisting with this article and ensuring it is relevant and accurate.

Thank you also to Carolyn Drew from Animal Liberation A.C.T. for further ensuring the accuracy of this article, and providing multiple recommendations on how individuals can help kangaroos. 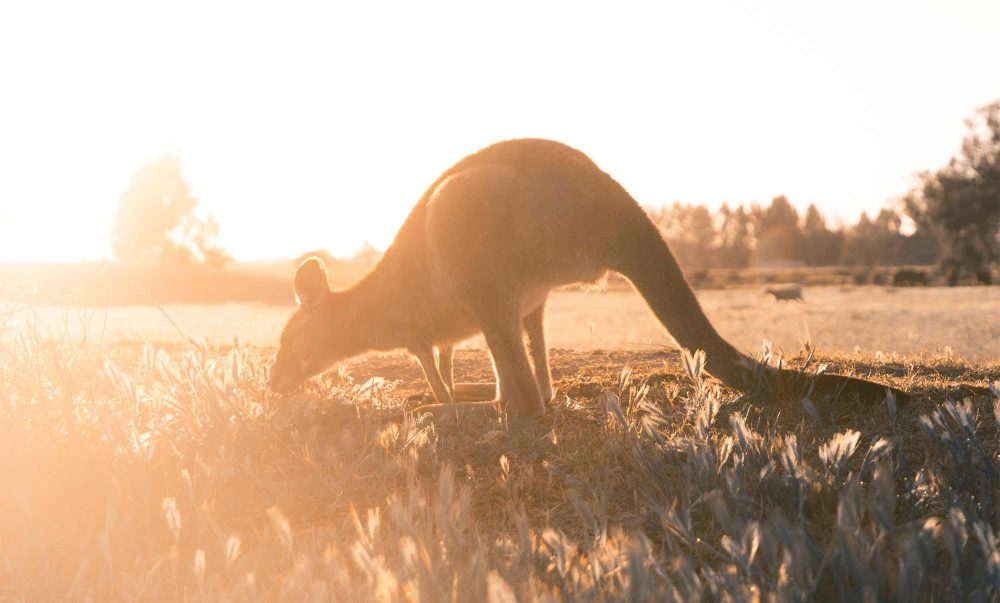