The mother pictured above is a typical example of sows who give birth to nearly 5 million pigs raised for slaughter in Australia each year.

Their piglets are killed when five months old. The mother’s lifespan depends on how long her body can withstand constant pregnancy, confinement, depression and deprivation.

Despite how they are raised, whether on factory facilities or free range farms, the majority of pigs are stunned in CO2 gas chambers where they suffer horrifically from their first lungful of gas, burning from the inside out. They then have their throats cut and bleed out.

While studies into pig cognition are at a relatively early stage, their intelligence and sophistication is obvious.  Studies have considered the capacity for pigs to experience a state of self which is linked to ‘theory of mind’. This is to suggest that pigs are able to comprehend the mental states of themselves and others.  They have been described as having the ability to remember events by where they took place and are often compared cognitively in many other ways to dogs and small children. 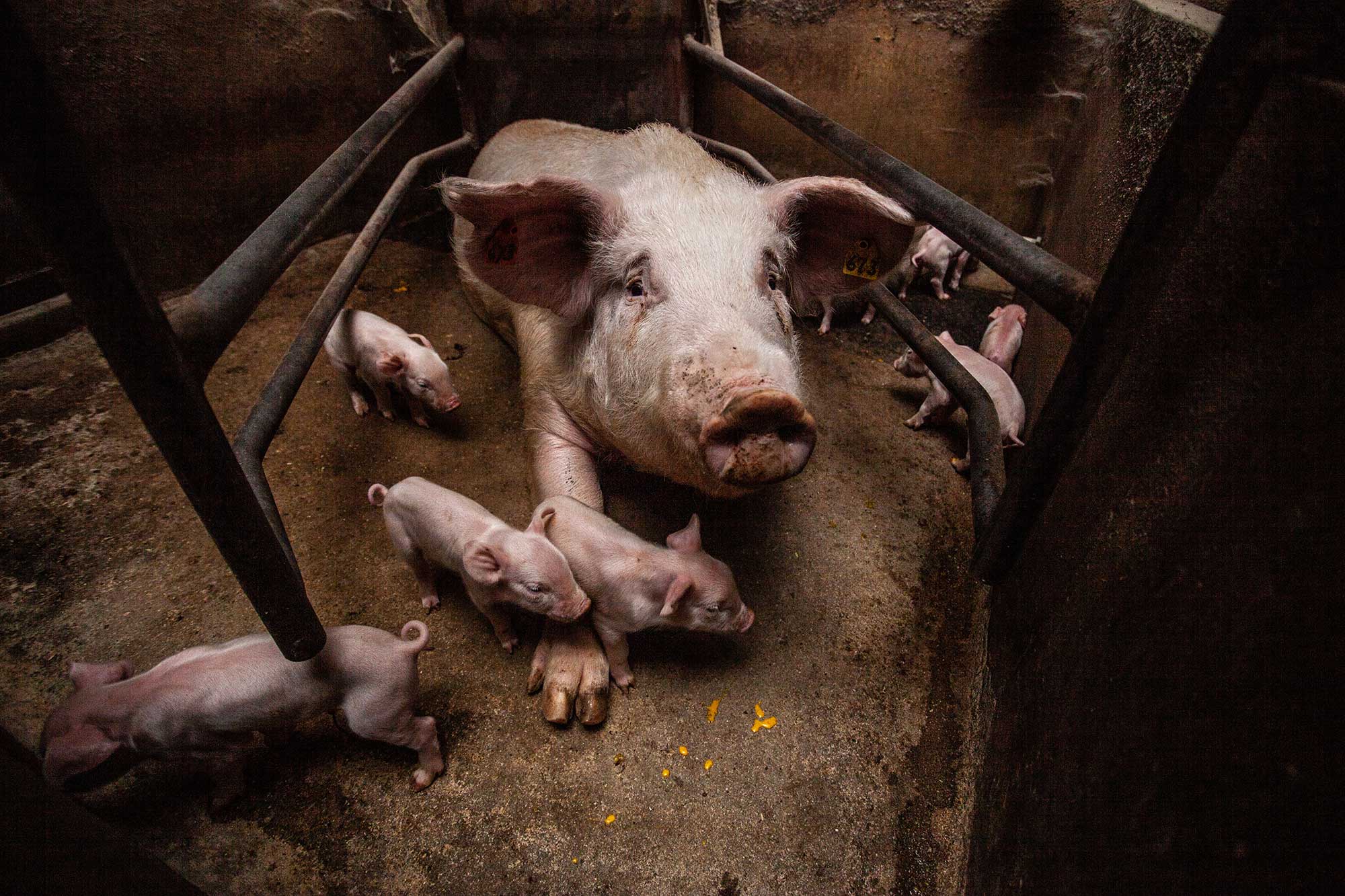 In the lead up to giving birth, mothers are moved into confinement, commonly known as farrowing crates.  Inside this crate they are unable to turn their bodies around.   A mother will live inside this crate, providing teat access to her piglets through metal bars, until the period of weaning.  Weaning ages differ depending on the country; in Australia this equates to a further 28 days of confinement.   The pig industry defends the use of farrowing crates for the supposed ability to protect piglets from being crushed under the weight of their mother.  It is important to remember these key facts when considering this practically.

Mortality rates in piglets are high for multiple reasons. Firstly, sows have been selectively bred to meet industry demand by increased litter size. This leads to a high level of competition amongst piglets for the teats. Reduced access to colostrum inhibits the ability of piglets to thermoregulate and as a result they are  vulnerable to death and disease.  Other reasons for piglet mortality include neurological and physiological impairments  caused by prolonged prenatal stress. Studies have shown that piglets born to stressed mothers have reduced growth rate, increased risk of disease and heightened pain reactivity.  These are again, exclusive to farming systems.

The Denial to Nest Build

Nest building, for sows, is a highly motivated behavior that helps to influence their maternal abilities.  Research on confined sows documents their persistent attempt to nest build, even in the absence of materials.  This innate behavior is prevalent, despite the years of selective breeding that have separated domesticated sows from their wild ancestors.  In the wild, the sow will travel up to 6km from her social group to scout a specific location. Days will be spent constructing the nest from vegetation such as grass, twigs and branches.  Some reports of sow nests include the addition of roof like structures. The inability to perform this specific behavior leads to varying degrees of negative welfare state. Stereotypies, self inflicted injury and other behaviors, consistent with clinical depression have been frequently observed.  Within the confines of farrowing crates, where mothers are unable to rest from nursing duties, chronic mastitis is a common result.

Tail removal is performed on developing pigs, often without anesthetic.  This painful procedure is performed to prevent tail biting which occurs as a redirected oral behavior.  The remarkable intelligence of pigs is afforded little to no stimulation within intensive systems. As a result, their frustration is deployed upon litter-mates.  The pain and secondary infection avoided by tail biting is counteracted by the pain and secondary infection caused by the tail docking procedure. Furthermore, psychological frustration is not resolved by removal of this redirection. Other painful procedures include teeth and ear clipping for identification purposes.

“The killing of free range pigs at the slaughterhouse was particularly distressing. One pig was absolutely terrified, screaming and frothing at the mouth. She could see pigs bleeding out before her. She twisted and turned her body desperately trying to escape. The slaughterman panicked and planted the electrical stunner on her head so tightly that smoke rose. Her eyes caught mine in sheer terror and pain – more than anything I wanted to get her out of there.”
– Patty Mark, Founder, Animal Liberation Victoria

Pigs have a life expectancy in the wild of 10-15 years.  Those raised for meat are slaughtered at just 6 months of age.   This journey from piggery to slaughterhouse is often long and pigs are usually deprived of water for the duration of this journey.   They suffer from thermal stress and are often crushed and injured.  The emotional intelligence of pigs has lead industry to employ group gassing (gas chambers), in what they claim to be the most ‘humane’ slaughter method.   CO2 is cost effective and the extremely high concentration used (80% -100%) allows for fast production at a significant cost to welfare. Hidden camera footage demonstrates the distress and aversion experienced by pigs in this system.