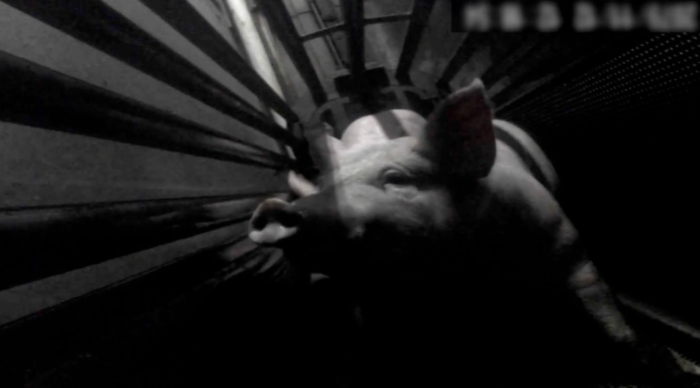 These gas chambers rely on some major misconceptions. In particular it is suggested that, as you would expect with carbon monoxide, the pigs gently fall asleep, unaware of what’s happening. With carbon dioxide however, it is the complete opposite – they are lowered into a gas chamber where they scream, thrash, kick and struggle to escape as the gas causes burning sensations throughout their bodies and they suffocate. 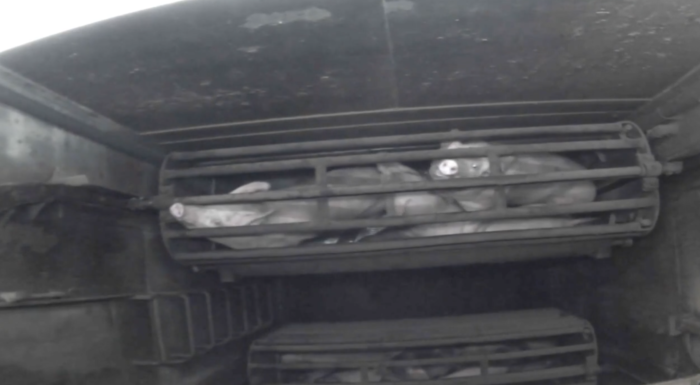 The investigation involved climbing down into the chamber while wearing an oxygen tank to position hidden cameras. The activist who did so immediately noticed their eyes burning, which led to the discovery that when carbon dioxide reacts with liquids or mucus coated membranes (like that of the eyes, nostrils, sinuses, throat, and lungs), it forms carbonic acid. From their first lungful of gas, these pigs are burning from the inside out.

The three slaughterhouses are:

At Diamond Valley Pork, the camera captured a pig who somehow pushed through the barrier into the chamber before a gondola was in place, falling onto the gondola below and then down to the bottom of the chamber – if the fall didn’t kill him, the gas would have within minutes.

Diamond Valley Pork was an RSPCA accredited abattoir at the time Pig Truth was filmed.

RSPCA approved pork allows for CO2 gassing of pigs in group stunning systems. Following the campaign release this accreditation was removed from their website. 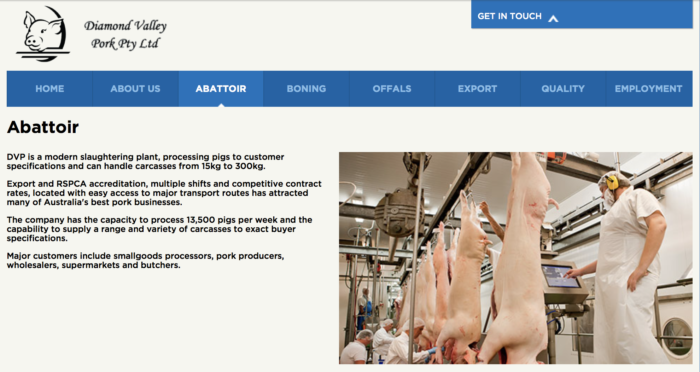 Diamond Valley Pork website prior to the investigation’s release.

However, Diamond Valley Pork have since stated that they are “approved to process RSPCA approved pigs”.

At the Benalla abattoir, workers use high amperage electric prods connected to mains power, delivering repeated excruciating shocks to the pigs in order to force them up the chute into the gas chamber. 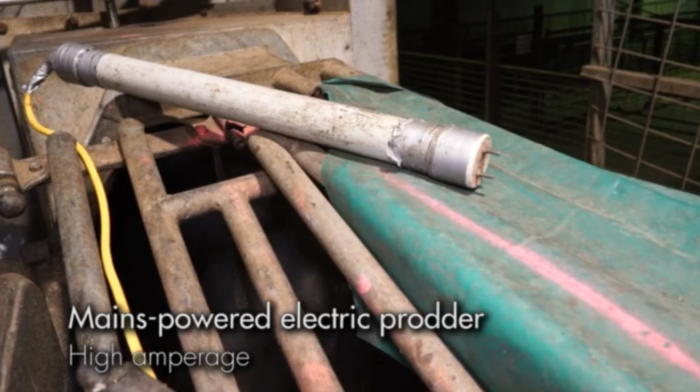 On multiple occasions the prod was held against the anus of the pigs. This is done all day long by several different workers, in full view of the facility’s surveillance cameras.

The industry tells the public that gas chambers are a humane slaughter method and wants us to believe that the pigs gently fall asleep, however nothing could be further from the truth.

You can choose not to support this cruelty – visit veganeasy.org to find out how.