The myth of a happy farm life and painless death masks a life of misery.

The myth of a happy farm life and painless death masks a life of misery.

Cows are intelligent animals who form lifelong bonds with each other.

Cows can live for 20 years, yet dairy cows are typically killed in their seventh year, and cows raised for meat are killed at about one and a half years of age.

Cows lead miserable lives. They are routinely desexed, dehorned and hot-iron branded without any pain relief. Calves are taken away from their mothers, and they all have their lives cut short at the slaughterhouse.

This page will look at practices involved in the meat industry. Take a look at our page on dairy to learn more about the industry which kills over 500,000 baby cows every year. 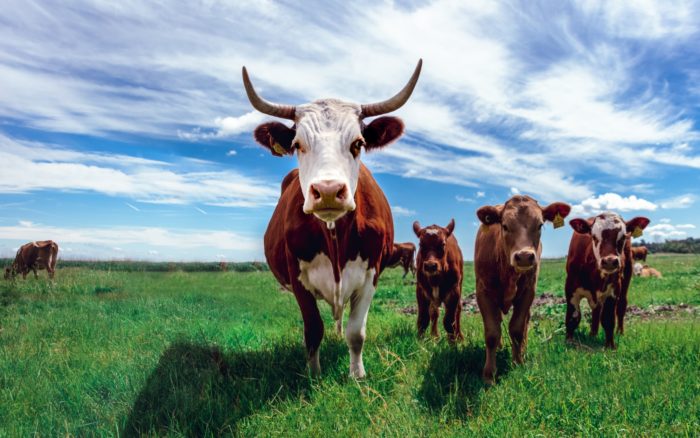 When cows are free from harm, they live unique and sociable lives. Cows have been found to have ‘eureka!’ moments, taking pleasure from learning new things. They become excited, they have best friends, enjoy playing and socialising.

Farmed cows, in both the beef and dairy industry are often forcibly impregnated. and specifically. Almost all dairy cows are artificially inseminated, and you can learn more about the dairy industry here.

In order to breed calves that are of the ‘highest quality’, only specific bulls are used for breeding. The semen that is inserted into female cows is taken from bulls through means such as ‘electro-ejaculation’. This exploitative method involves forcing  a probe into the rectum of a bull which stimulates him until he involuntarily ejaculates. 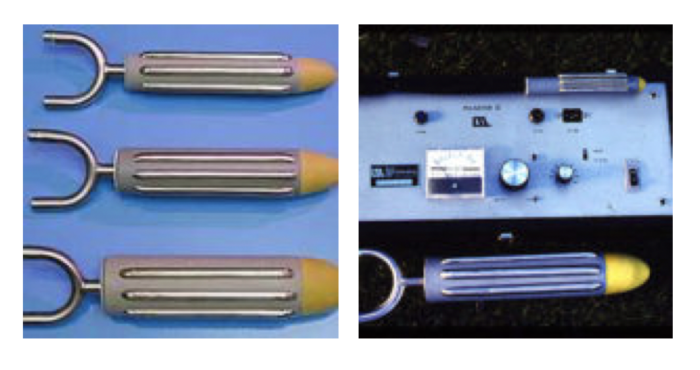 Cows are then artificially inseminated. This process (AI) exploits the sexual organs of a female cow, and in practical terms, means forcing a fist into the anus of a cow and inserting a rod with semen into her uterus, through her vagina. 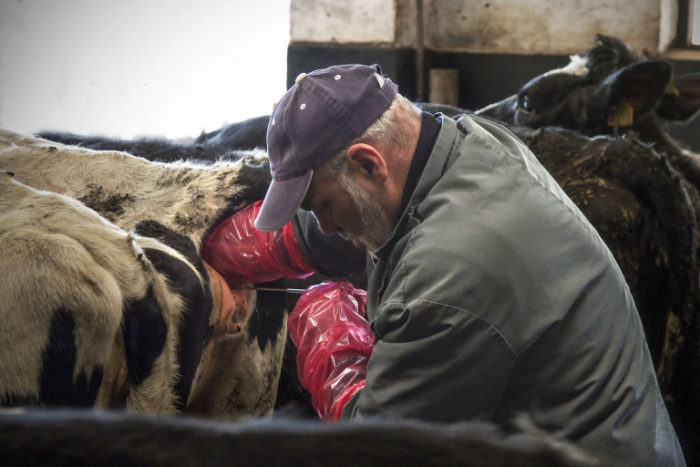 It is legal, standard practise to castrate male calves without any pain relief. This is done to make farming male cattle easier, as it prevents unwanted mating, greater genetic control, and more easily handled animals.

The most common method of castration in Australia is ‘surgical castration’ using a scalpel or knife. This method does not require any pain relief on calves, and it is almost always performed on calves (following industry recommendation).

Surgical castration is inflicted on fully conscious calves. A scalpel blade is used to cut the scrotum open. Next, the testicles are either ripped or cut out, or the blood vessels are crushed and cut.

Another method of castration recommended by the Government is the use of rubber bands. These bands cut blood circulation and kill the nerves in the testicles. This process, which takes usually three to six weeks, as well as the healing process of this method is extremely unpleasant. In Victoria this method can be used, without pain relief, until a calf is twelve weeks old. 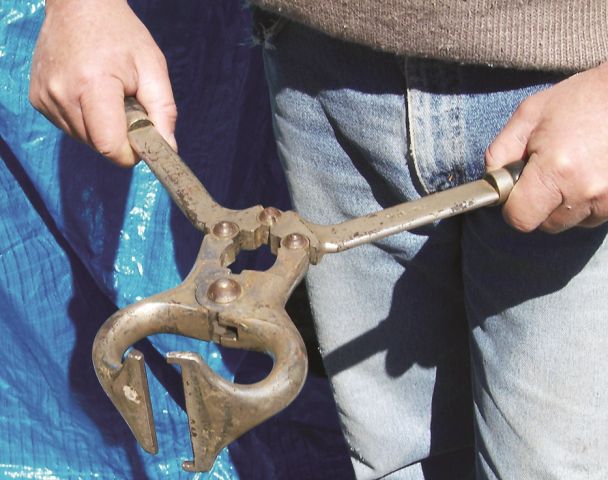 Castration may also legally be performed with a ‘Burdizzo emasculator’. This is a clamp which crushes the spermatic cord and blood vessels, and it can be used without pain relief.

Cattle can have their horns, or horn buds removed without any pain relief, and this should be done ‘preferably’ to animals under 6 months of age.

Dehorning can be performed with a heated cautery, which is iron metal which burns and kills nerves, stopping horn growth. This is very painful, and can of course burn not only the horn buds but the surrounding skin.

Dehorning can also be performed with a gouging knife or scoop dehorner, and both of these bloody practices are legal without pain relief for calves under six months old.

Branding is used as a form of identifying individual beings through symbols, letters and numbers. Branding does not require any pain relief.

Cattle are branded with metal irons that are either extremely hot, or extremely cold (with the use of liquid nitrogen). Both hot and cold branding are painful not only at the time of branding, but as the wounds heal and scar. 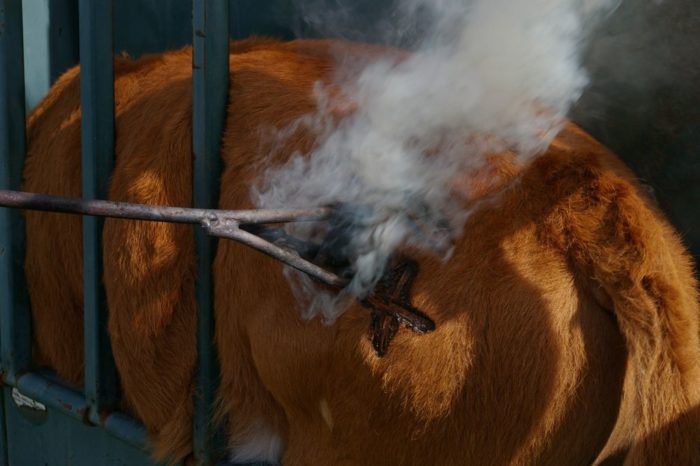 Unlike many other farmed animals, cattle spend the majority of their life living outside and feeding on grass. While this ‘free range’ life may seem better than factory farming from a ‘welfare’ perspective, many farmers have so many cattle on such a large amount of space that they are unable to adequately care for them. Not to mention of course, all these cattle are slaughtered.

When most farms have hundreds of cattle, if not thousands,they are unable to adequately care for the needs of all of them, especially if they are not monitored regularly because farmers do not want to monitor large areas of land. 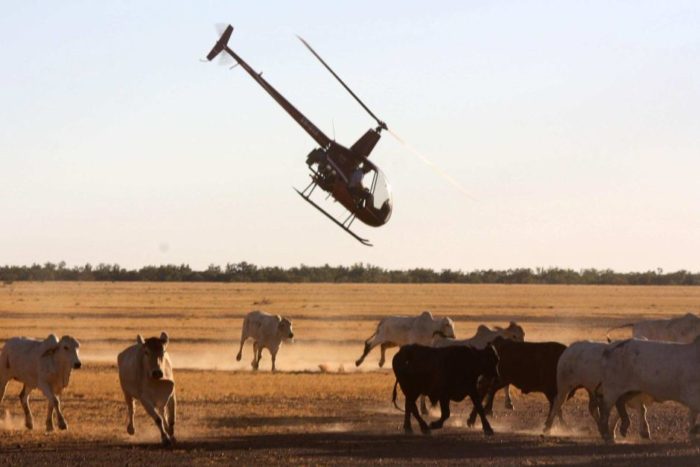 Farmers on some extremely large cattle stations in Australia muster their cattle using a helicopter, when they want to bring them in for slaughter. Helicopters fly low to the ground and near to cattle, which results in extreme stress. Cattle are forced to run from them for long distances, as they are mustered without breaks for food or water.

Feedlots for both meat and dairy cows are now widespread. A feedlot is a yarded area where cattle, after being raised elsewhere, are forced into close confinement before they are slaughtered. They are used to ensure cattle are fattened to a specific weight which will yield the most profit.

Feedlots do not allow cattle to eat grass as they naturally would, instead cows are fed grains so that they will be fattened faster. 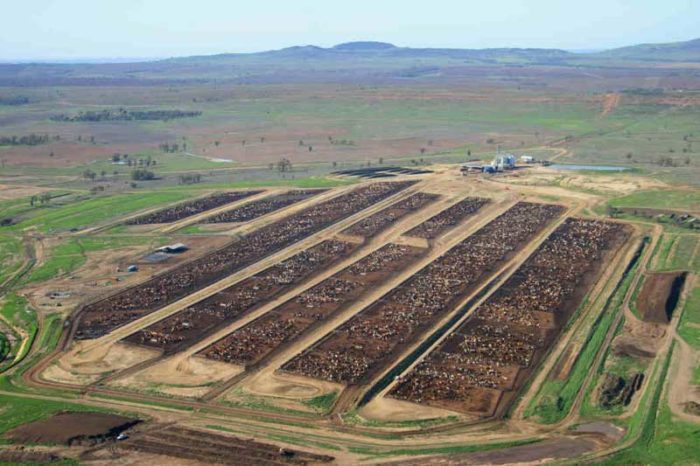 Some feedlots force cows into individual pens, while others are kept outside. The confined animals either stand deep in muddy excrement or suffer dust, flies and relentless heat from a blazing sun. 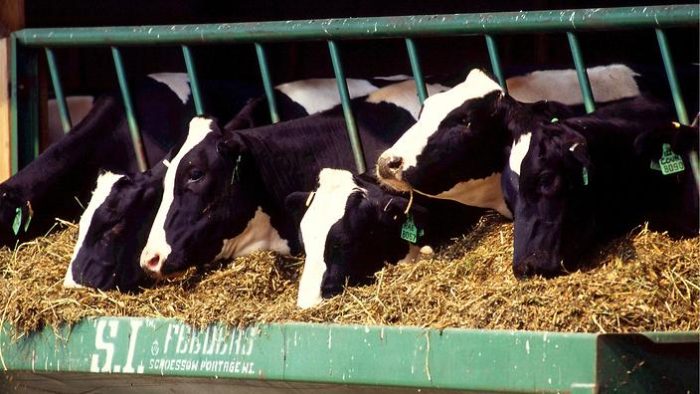 There are around 600 cattle feedlots in Australia and approximately 40% of Australia’s total beef supply and 80% of beef sold in major Australian supermarkets come from cattle who spent the final 10 to 15% of their lives crammed together in feedlots.

The journey from farm, to feedlot, to saleyard and slaughterhouse is long and traumatic. This journey takes places without food or water, even in the hot summer. Meat and Livestock Australia also recommend that farmers deny food and water to animals for 8-12 hours prior to transport. 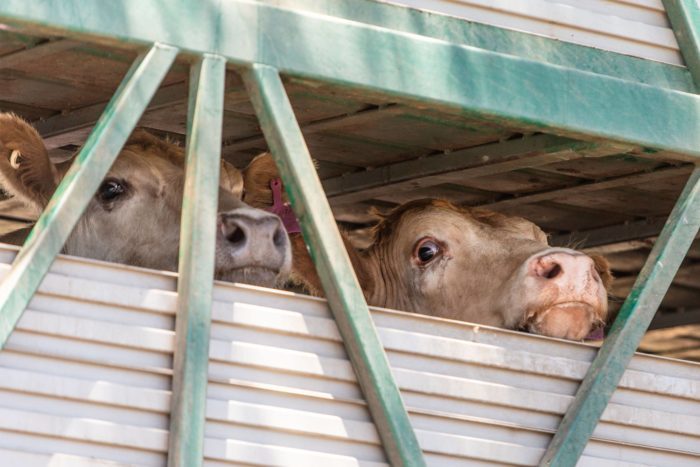 In total, bobby calves can be withheld food for the last 30 hours of their lives. Waiting in the holding pens of the slaughterhouse, calves are starved, and cry out for their mothers until they are ushered to the kill floor.

In the killing line, cows are fully aware of what lies ahead. They are terrified, kicking and screaming. They foam at the mouth in the kill box from fear as the slaughterhouse worker takes aim between their eyes. Cows too sick or injured to stand are often dragged with chains to the killing floor or left to slowly die. 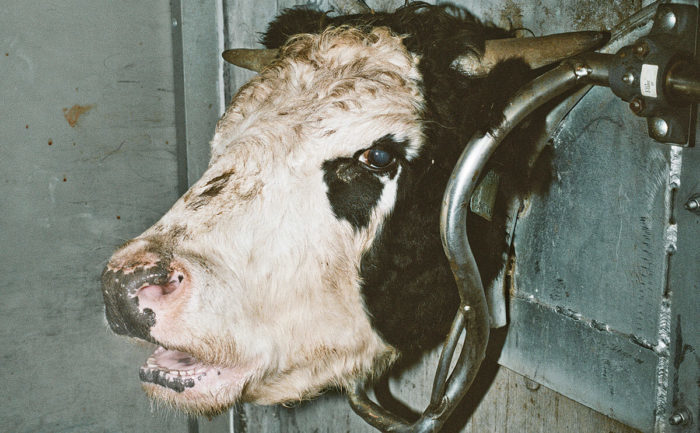 A frightened cow held in a ‘knocking box’ before they are slaughtered.

Cattle are slaughtered in an abattoir with a captive-bolt pistol which shoots into their brain, stunning them. A cow must then have their throat cut open so that they bleed out, killing them. If slaughterhouse workers take too long to sever a major neck vessel, a cow can regain consciousness and bleed out while conscious. 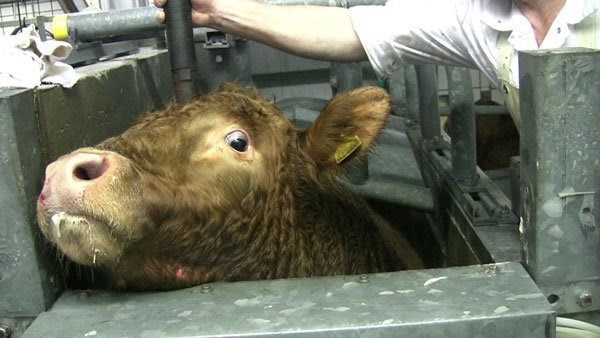 A distressed cow about to be shot with a captive-bolt gun.

Researchers at the Swedish university of Agricultural Science studied the efficiency of captive bolt stunning, at a commercial abattoir. The study, which followed just under 1000 cattle through the slaughter process, across five days, found that inaccurate stunning and re-stunning were frequent. The study found that only 84.1% of the 998 observed cattle were adequately stunned. The cattle still partially or fully conscious, were then either repetitively shot in their brain, or slaughtered while being semi-conscious.

A minimum of 550,000 calves are killed every year in Australia in slaughterhouses, not to mention the calves that are slaughtered on-site on farms.

Leather: Not a By-Product

The skins of cows and calves are an important economic part of the meat and dairy industries, described by Meat and Livestock Australia as a ‘co-product’. The global leather goods market is valued in 2019 at $95.4 billion USD, and when skins are not sold, the meat industry loses huge amounts of profit. 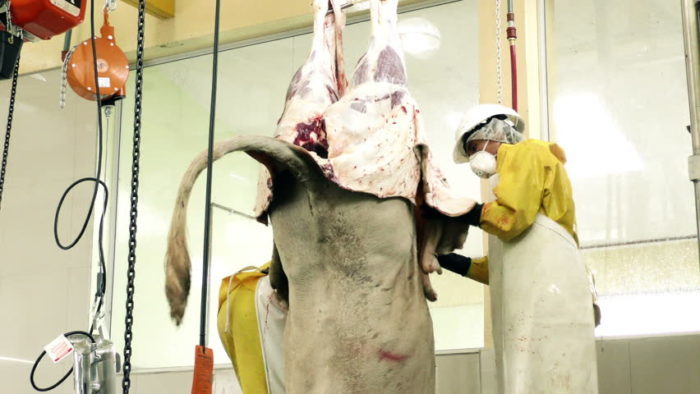 While most leather is made of the skin of the same animals exploited in the meat and dairy industries, some cows are raised specifically for their skin.

Don Oshman, publisher of Hidenet said: ‘Many European luxury bag makers use calf skins, and people aren’t eating much veal these days… For this reason, more calves are being raised specifically for their skin: ‘A calf is raised in a pen and never goes outside, so its skin is blemish-free’.

While the country of origin of a dairy product or piece of meat is known to consumers, this is not the case for leather.

There are no laws requiring the accurate labelling of leather – who or where it came from. For example, Italy is Europe’s biggest producer of finished leather but less than 10% of the raw or semi-finished hides used in the industry come from Italian farms.

Italy is tied as only the 11th largest hide producer in the world, producing 3.6 million ‘pieces’ of skin a year. Most cow hides come from India, China and Brazil, countries all producing over 40 million pieces annually. 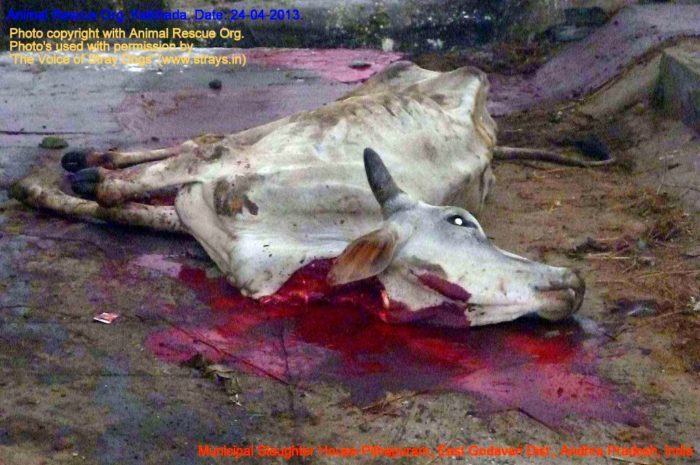 While slaughter and exploitation of animals is never ethical, many of the top leather producing countries are known to have especially poor ‘animal welfare laws’, meaning cows are slaughtered while conscious and exposed to further violence.

Strongheart, at our Liberation Sanctuary

So long as we consume beef and dairy, and wear leather products, we are paying for the systematic exploitation and slaughter of cows.