Tests performed on animals for medical research and teaching are so common in Australia that in 2017, over 20 million animals were experimented on.

Tests performed on animals for medical research and teaching are so common in Australia that in 2017, over 20 million animals were experimented on.

It is estimated that 500,000 animals suffer and die for the sake of beauty products every year worldwide. These distressed animals include rabbits, guinea pigs, hamsters, rats and mice. The tests are often conducted without pain relief and animals are usually killed once the experiment is completed.

Testing is not the only consideration. The ingredients themselves often come from exploited and slaughtered animals. Fat from slaughtered cows and sheep, shark liver, crushed bugs, lanolin from sheep in the wool industry, snail mucus and ground up animal hooves are all ingredients found in make-up and skin-care products. This is completely unnecessary.

In Australia, a ban on cosmetic testing on animals has been in effect since July 2020. Testing cosmetics on animals is not performed domestically, and the ban prohibits the importation of new ingredients tested on animals overseas.

However, ingredients previously tested are still permissible, as well as multi-purpose ingredients tested for other purposes like cleaning products.

It’s now easier than ever to find cosmetics that are 100% vegan and free from animal-testing. Check out these vegan, cruelty-free companies. 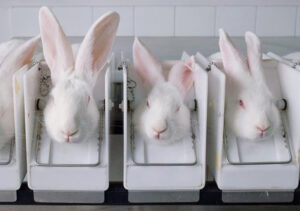 Yet, a staggering 95% of drugs tested ‘successfully’ on animals fail in human trials because they don’t work or are dangerous.  Animals of different species don’t necessarily react the same as other animals or humans, and therefore a substance tested on an animal can have a completely different effect on a human.

“Animals are not good models for predicting human clinical outcomes because of differences in physiology, metabolism and other differences between human and non-human animals.”

Animals are regularly subjected to painful tests which will most often end in their death and dissection. They may be:

In addition to being inexcusably cruel and producing questionable results, animal tests are also costly and inefficient. The expenses involved in breeding, feeding, housing, experimenting on and then disposing of the bodies all add up to excessive amounts, especially if the test takes months or even years.

“Unlike crude, archaic animal tests, non-animal methods usually take less time to complete, cost only a fraction of what the animal experiments that they replace cost, and are not plagued with species differences that make extrapolation difficult or impossible.”

There are better, more efficient and ethical ways to conduct medical research without harming other species. Alternatives include:

Purchase vegan and cruelty-free products. Check PETA’s comprehensive database to search for companies that do not test their products on animals.