‘From their first lungful of gas, these pigs are burning from the inside out,’ Animal Liberation Victoria says of carbon dioxide stunning technique 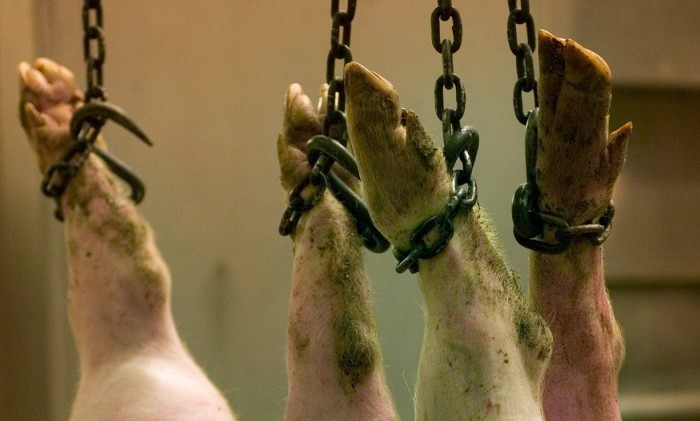 Dead pigs in an abattoir. Animal Liberation Victoria staged a protest at the Diamond Valley Pork facility in Laverton on Monday. Photograph: Gary Calton for the Observer

More than 50 police have removed animal activists from a Melbourne abattoir.

Eight activists with banners were taken down from the roof of the Diamond Valley Pork abattoir in Laverton on Monday and four more were removed from a “gas chamber” inside the building used for carbon dioxide stunning of pigs.

They were trying to shut down the operation as Animal Liberation Victoria released a video allegedly showing abuse of pigs at several abattoirs, including the Laverton one.

A whistleblower had alerted Animal Liberation to the alleged abuse at Laverton, the group said in a statement, and two years ago an activist entered the on-site chamber wearing an oxygen tank and hidden cameras.

“The activist who did so immediately noticed their eyes burning, which led to the discovery that when carbon dioxide reacts with liquids or mucus-coated membranes it forms carbonic acid,” it said. “From their first lungful of gas, these pigs are burning from the inside out.”

Carbon dioxide stunning is used to make an animal unconscious just before slaughter. The RSPCA says pigs require an exposure of at least 15 seconds before body collapse occurs.

“There have been welfare concerns about CO2 stunning because it irritates the respiratory tract,” its website says. “However, research has produced conflicting results with some showing pigs tolerate CO2 stunning and some showing they do not.”

Carbonic acid is produced during a chemical process in which carbon dioxide dissolves in water. It is often used to make artificially carbonated drinks.