They were found filthy, hungry and cramped together in small cages. Some of them were seriously sick. Almost 120 small dogs and puppies were taken from an alleged puppy farm in Longwood in northern Victoria on Tuesday. Four dead dogs were also removed when two neighbouring properties were raided. 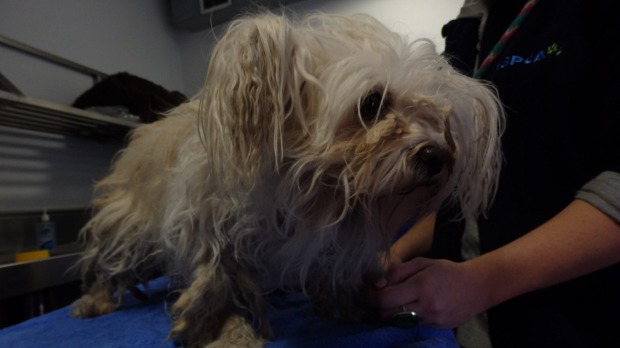 RSPCA staff seized more than 100 dogs and puppies from a property in northern Victoria. Photo: Supplied

One of the raided breeders Heather Healey, an active show dog enthusiast with prize-winning dogs who runs the Euroa Kennel Club, is a former secretary of the Chihuahua Club of Victoria.

RSPCA staff seized more than 100 dogs and puppies from a property in northern Victoria.

RSPCA Victoria took the Chihuahuas, Chinese Crested Dogs and Spaniels after its Special Investigations Unit raided the homes, helped by Victoria Police. They declined to say how many dogs were taken from each property.

However, a friend of Ms Healey said most of the problems were with the breeder next door, not Ms Healey.

The team of 21 RSPCA staff was investigating suspicions of large-scale animal cruelty at the properties.

Six cats were also taken into care, with one seized and five surrendered to RSPCA Inspectors.

“All of the animals were taken into care because of immediate and serious concerns for their welfare,” a spokesperson said. “They were allegedly found to be living in small cages and squalid conditions, both inside and outside the residences. Veterinarians attending the premises also identified a number of health and husbandry concerns.”

Ms Healey was caught in a hidden camera sting by Animal Liberation Victoria back in 2010 after complaints to Strathbogie Council went unheeded.

Footage from the sting showed groups of excited dogs kept together in small wire pens and baby cots.

A woman involved in the 2010 sting, Stephanie Rodda, said she broke down crying upon seeing how the dogs were kept.

She said they jumped up and down desperate to be let out or held, while others shivered in a corner in fear of people.

“When I entered the house the first thing I noticed was the constant barking of many dogs and mess everywhere… I felt dizzy from the odour,” Ms Rodda said.

“They do not get let out of these pens for the duration of their whole life.
Another woman who went to buy a dog from the breeder, Kate Hallam, a 39-year-old veterinary nurse, described seeing small cots holding up to eight dogs. She said the smell was “disgusting”.

“The conditions that we witnessed were truly horrendous,” she said.
“The dogs were forced to sit, sleep and live in their own faeces and urine. Only one cage actually had a bowl with water in it. I was horrified by what I was seeing.”

She said there was no bedding for most of the dogs, and the runs were filthy, as were the animals.

“The lack of space, water, exercise, veterinary attention, environmental stimulation, hygiene and most of all care, that I saw was in every way, wrong.”

Animal Liberation Victoria purchased three dogs in the worst health at the time in order to save them and took them for treatment at the Melbourne University Vet Clinic.

Founder Patty Mark said it was unacceptable that the RSPCA and council took six years to act. The organisation also complained to Dogs Victoria.

“It’s a very frustrating situation,” Ms Mark said. “There is a lot of heat on the RSPCA because they failed to act over and over again.”

Ms Healy declined to comment on the raids but a woman who answered Ms Healey’s phone and identified herself as a friend said she was “most definitely” a proud breeder who had done a lot in the show dog community.

“She is beside herself at the moment,” the friend said.
Dogs Victoria, the peak body for purebred owners and breeders, confirmed that Ms Healey was a member with registered dogs, but there had been no complaints against her.

“I just can’t begin to tell you how appalled we are as an association that this is going on,” CEO Lyndall Black said. “The vast majority of our judges and members care very much for their dogs.”

She said Dogs Victoria was helping the RSPCA with the case.

“We rely really heavily on concerned people letting us know of these situations.”

All of the seized and surrendered animals were taken to an RSPCA facility and were receiving veterinary care. They will be available for adoption in the future.

Some dogs, cats and birds remain at the properties but notices have been issued to improve the animal’s health hygiene, husbandry and food/water provisions.

Anyone with concerns about the welfare of animals can make a report to RSPCA Victoria at rspcavic.org or 9224 2222.