The 2022 duck shooting season has already reinforced the barbaric nature of this so-called ‘sport’.

The Victorian Government once again turns a blind eye as numerous infractions of its own rules are committed.

Coalition Against Duck Shooting members discovered 23 dead birds buried in a pit on the opening weekend of the duck hunting season. Shooters have exceeded bag limits and inhumanely dispatched birds – in one documented case, a shooter hit a native water bird and simply stuffed them into their bag while clearly still alive.

These wetlands should be havens for wild birds, not killing fields where they are slaughtered for fun.

There has never been a more important time than right now to let the Victorian Government know that we need to finally put an end to this bloodsport. Please see our campaign timeline then scroll down to take action for ducks now. 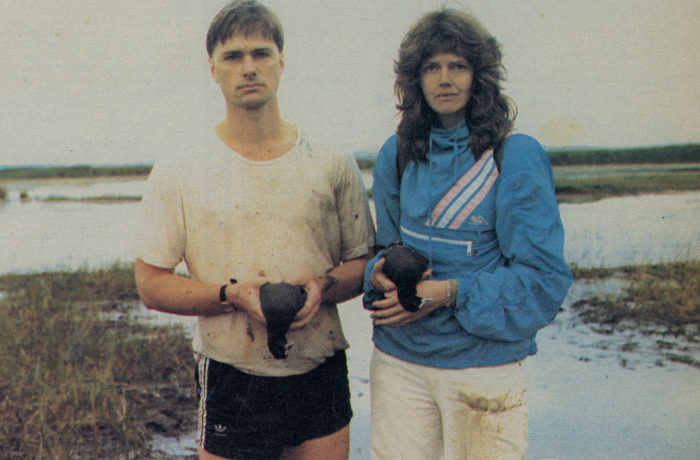 An ALV rescue team was part of a group of around 12 rescuers who took part in the first duck rescue, working closely with tireless wetland campaigner Laurie Levy as part of the Coalition Against Duck Shooting. Pictured here are ALV founder Patty Mark and Vice President Matthew Perry, holding protected coots who had just been blasted out of the sky. 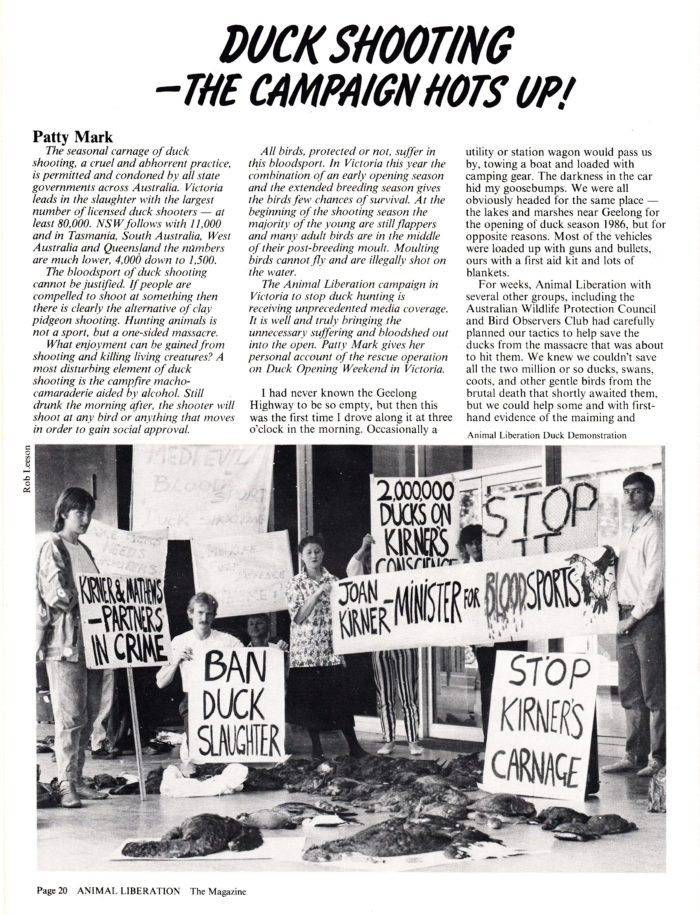 Prior to the 1987 Duck Opening we prepared a 30 page submission opposing duck hunting to the Senate Select Inquiry into Animal Welfare and every State Minister for Conservation (Summary of 1987 Duck Shooting Submission). We naively believed an end to duck shooting was in sight. Thirty years later the numbers of duck hunters have dropped significantly, and duck shooting has been banned in several states, but we are still fighting.

Some of the dead birds gathered after the 1987 duck season opening, including rare freckled ducks. 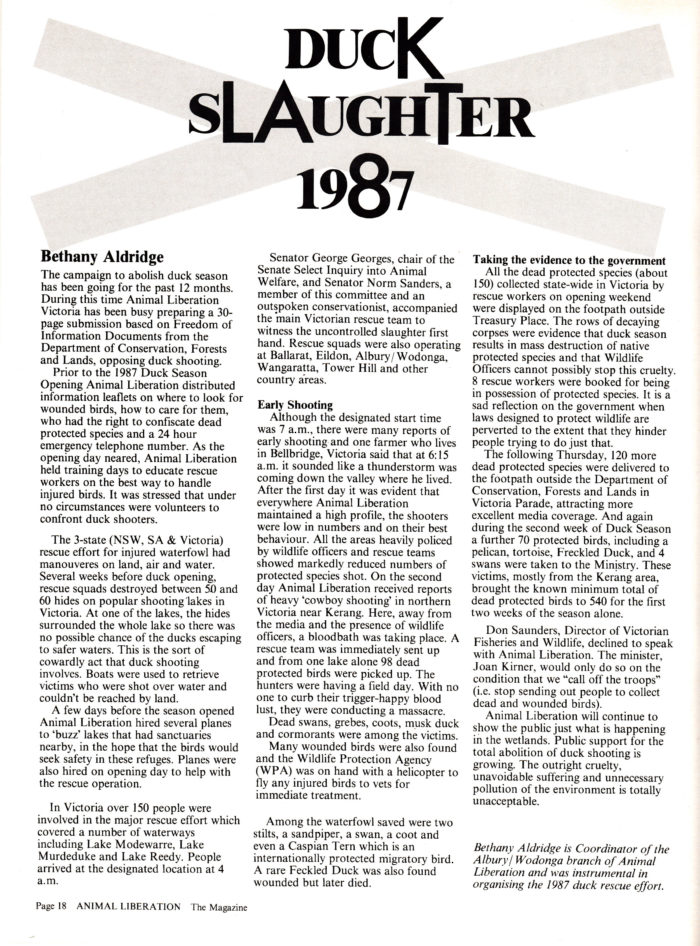 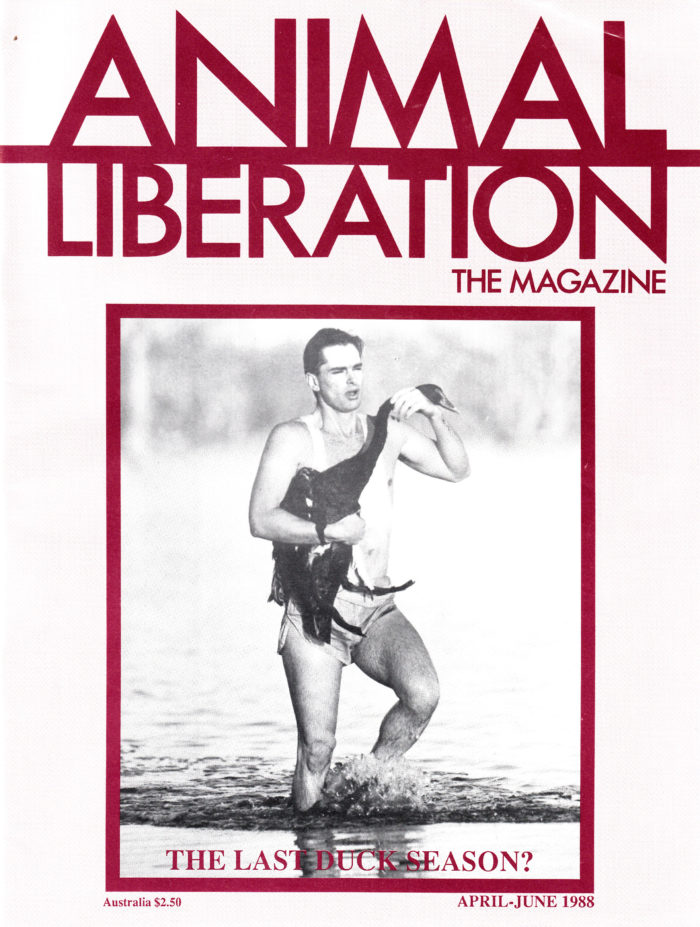 Duck rescue started in Victoria in 1986 and the campaign has since then gathered momentum around Australia and across the Tasman Sea to New Zealand. 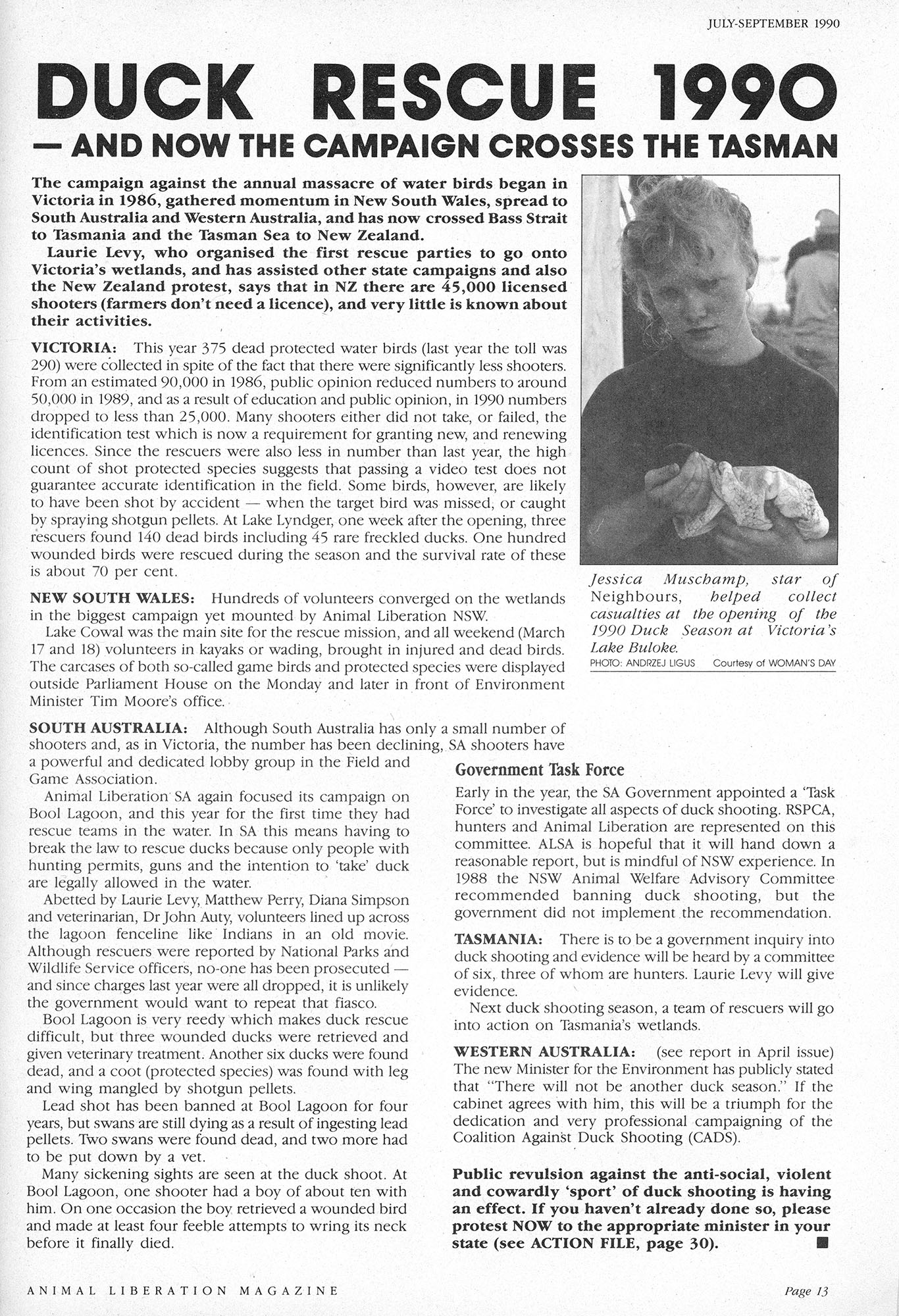 Report on the 1990 duck rescue in Animal Liberation magazine.

“There is widespread opposition throughout the community to the cruelty and environmental damage caused by shooters… Evidence from previous [WA] seasons shows that injured ducks have been left to die, protected species have been shot, and fragile wetlands have been polluted by lead and cartridges. Our community has reached a stage of enlightenment where it can no longer accept the institutionalised killing of native birds for recreation.”
—Dr Carmen Lawrence, Premier (ALP) 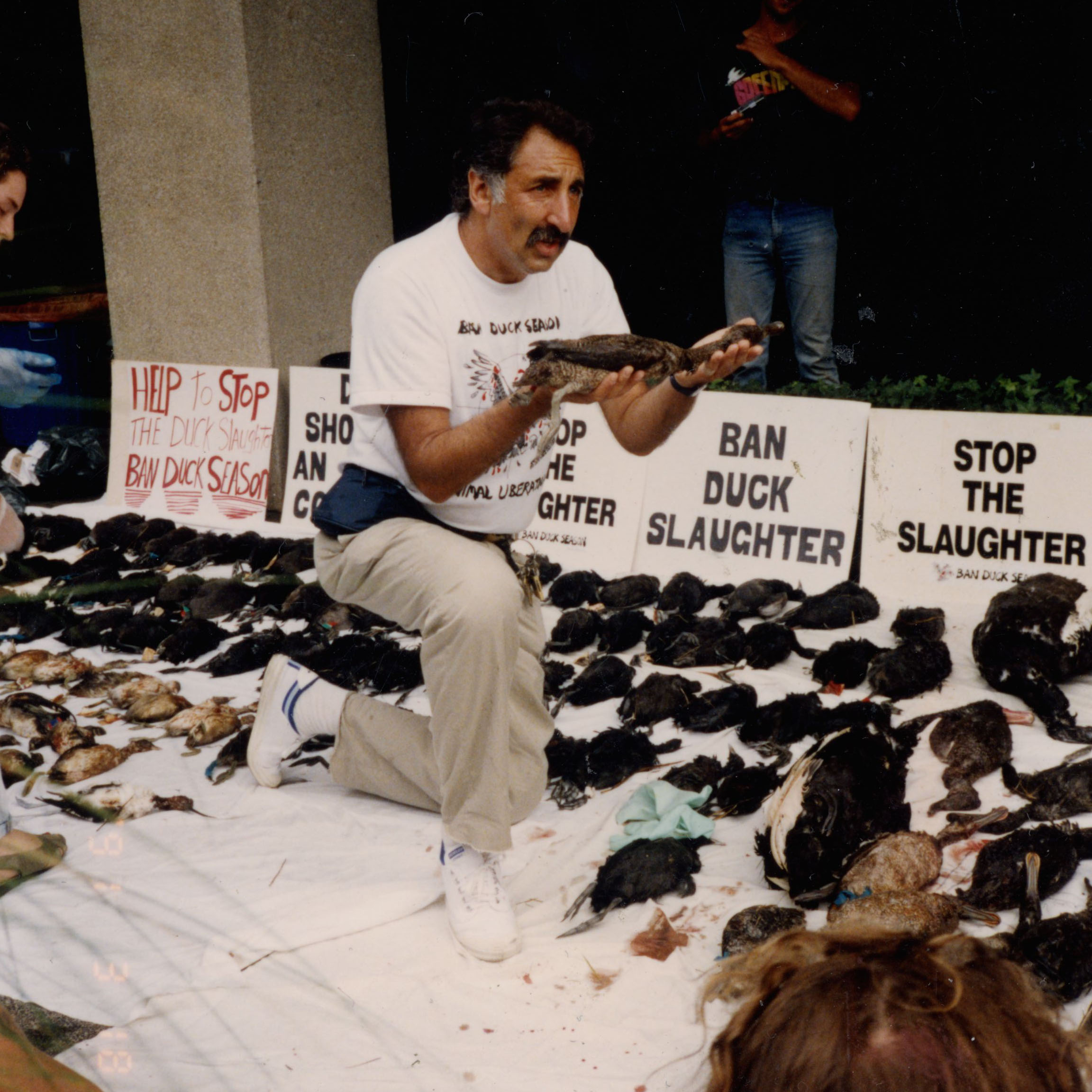 Laurie Levy, who has tirelessly run the duck campaign since 1986, outside Treasury Place the Monday after duck opening, showing all the dead protected species collected on the opening weekend. 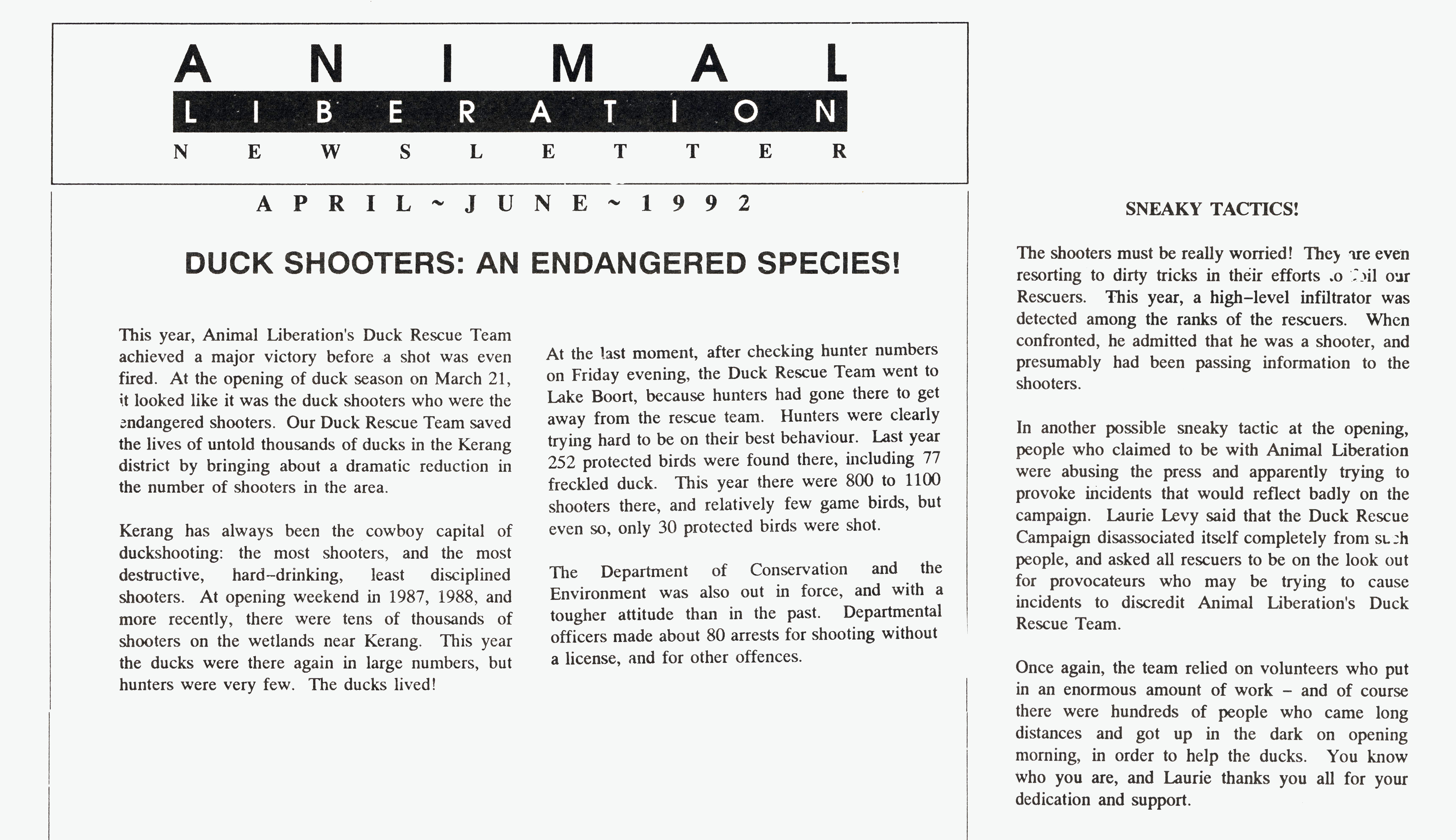 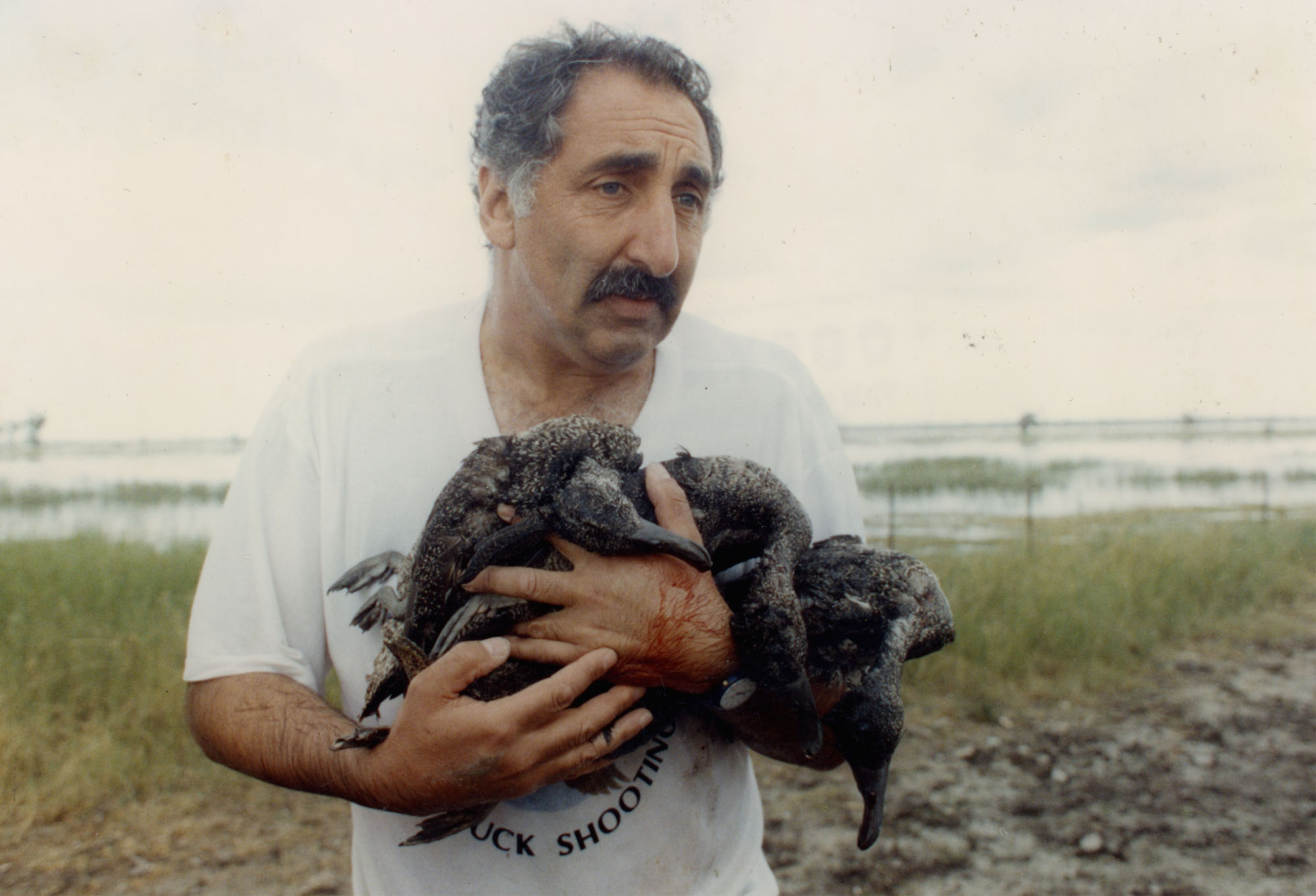 Laurie Levy holding some of the victims of the 93 season. Hunter numbers were down to an all time low yet a record number of protected water birds were killed. Victorian figures – 991 illegally shot protected species including 286 rare and endangered freckled duck. 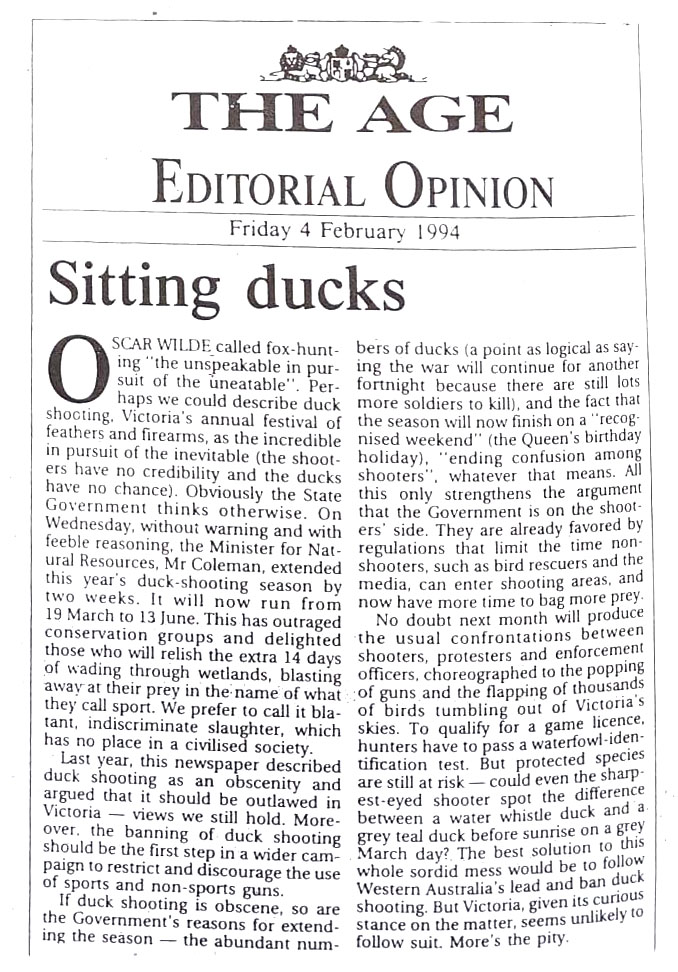 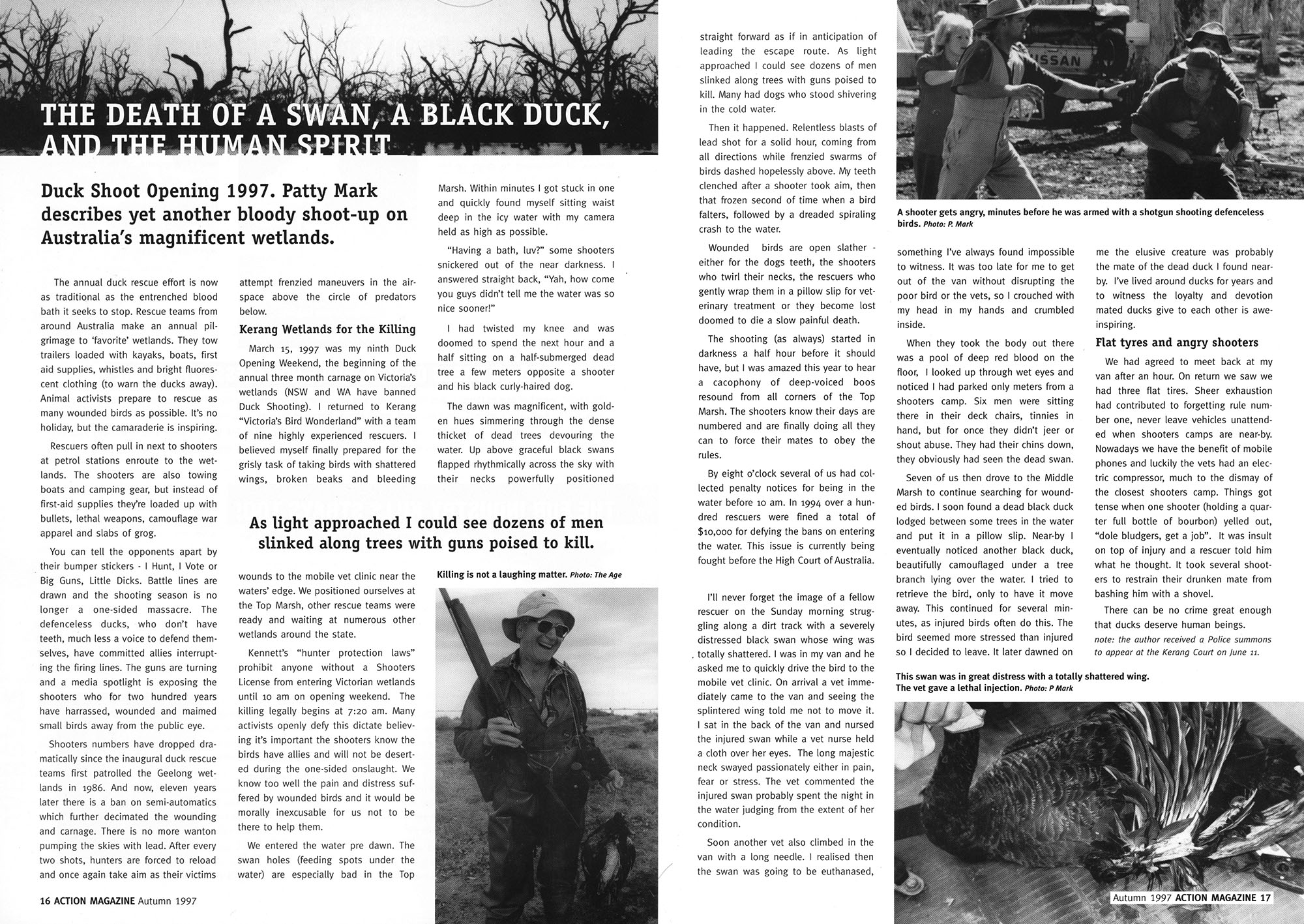 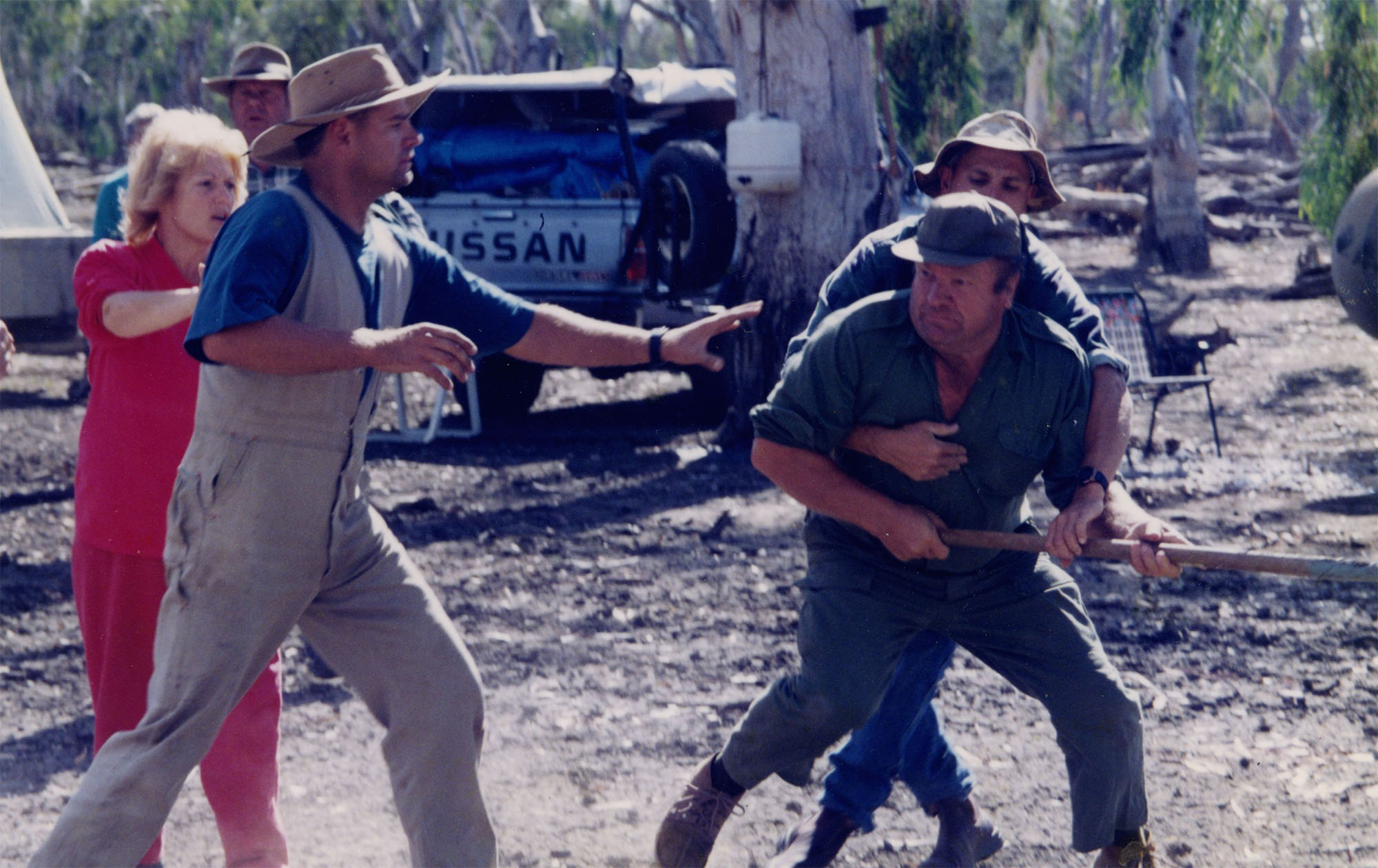 Violence from hunters towards rescuers has been a common occurrence. This hunter who had been drinking is pictured here trying to attack a rescuer with a shovel. The nearby Animal Liberation Victoria rescue van had three flat tyres after shooters let the air out. Photo: Patty Mark 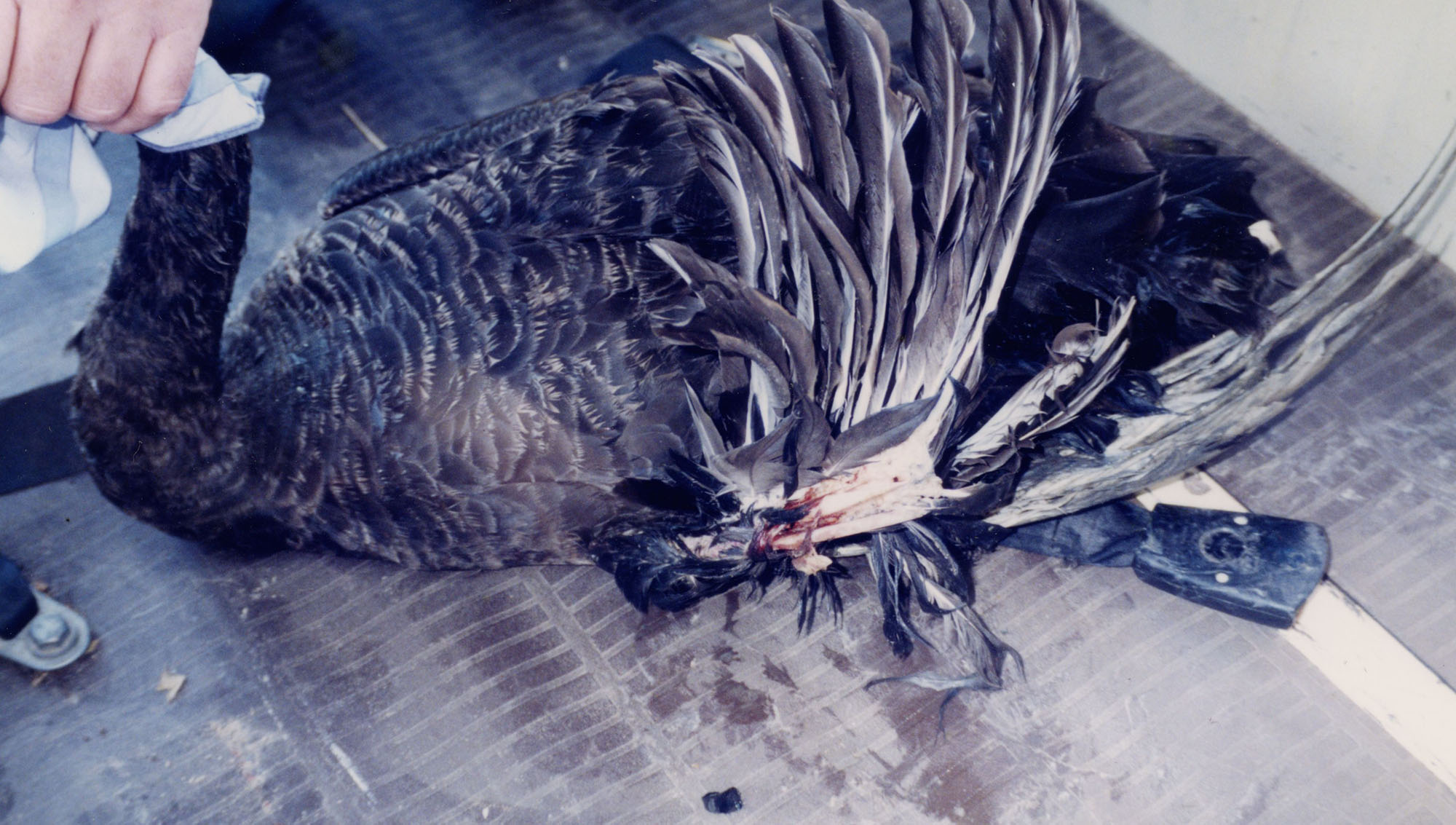 This swan in the back of the ALV rescue van was blasted out of the sky at the Kerang wetland top marsh. The swan’s injuries were too severe and they had to be later euthanased.

Scenes from the opening

Photos by Julia Anthonis from the 1998 duck season opening. 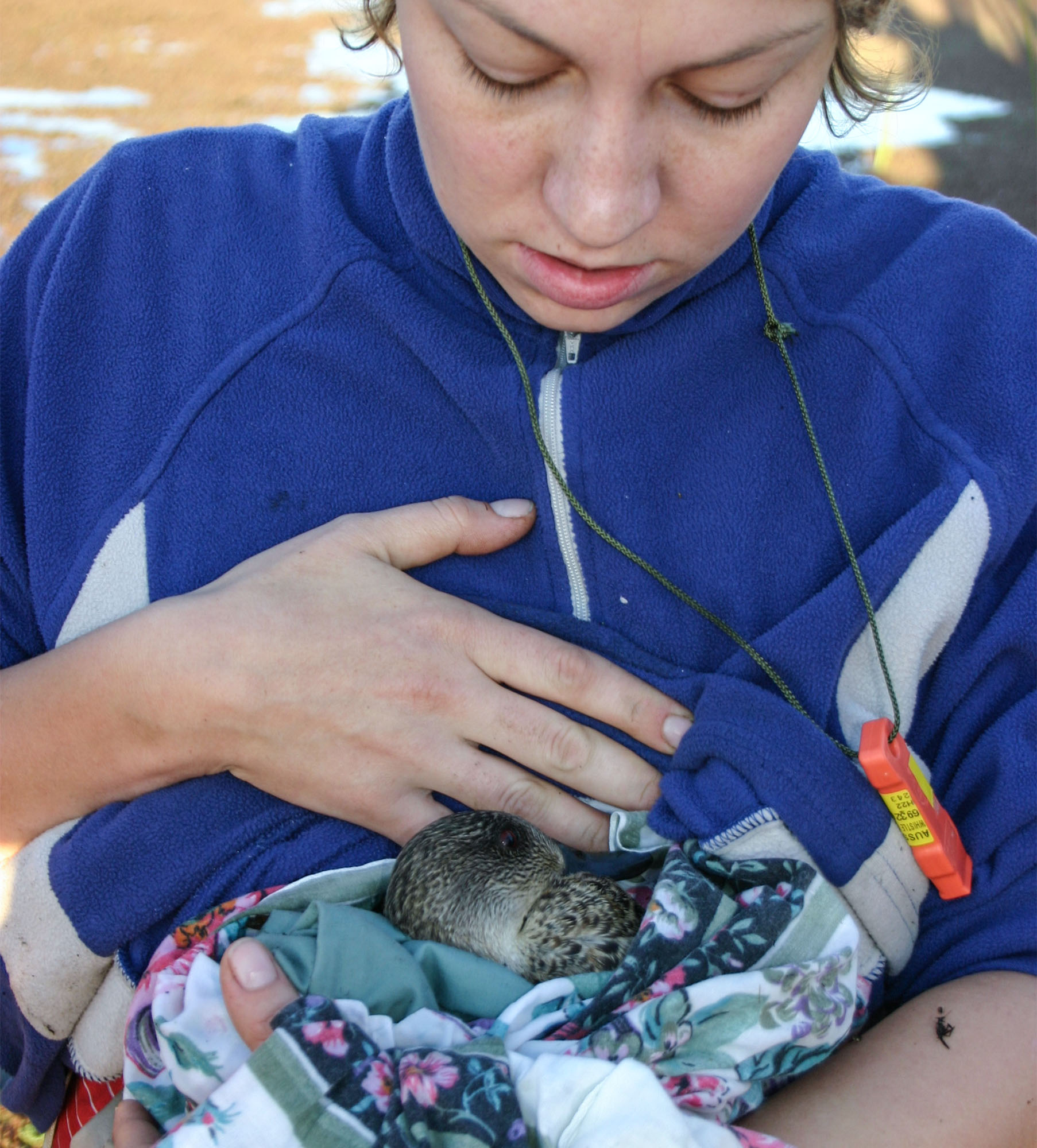 Terrorism on the wetlands 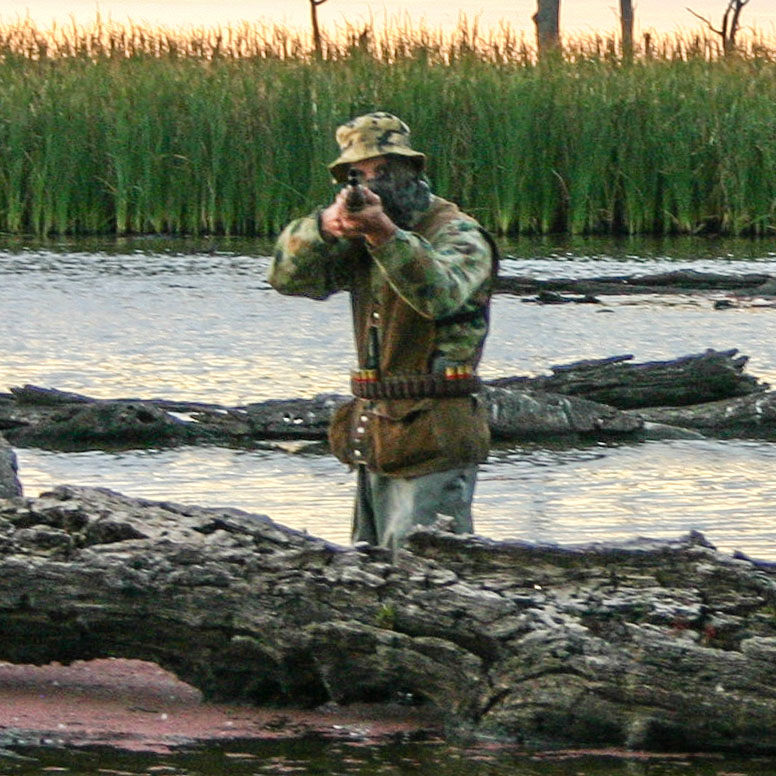 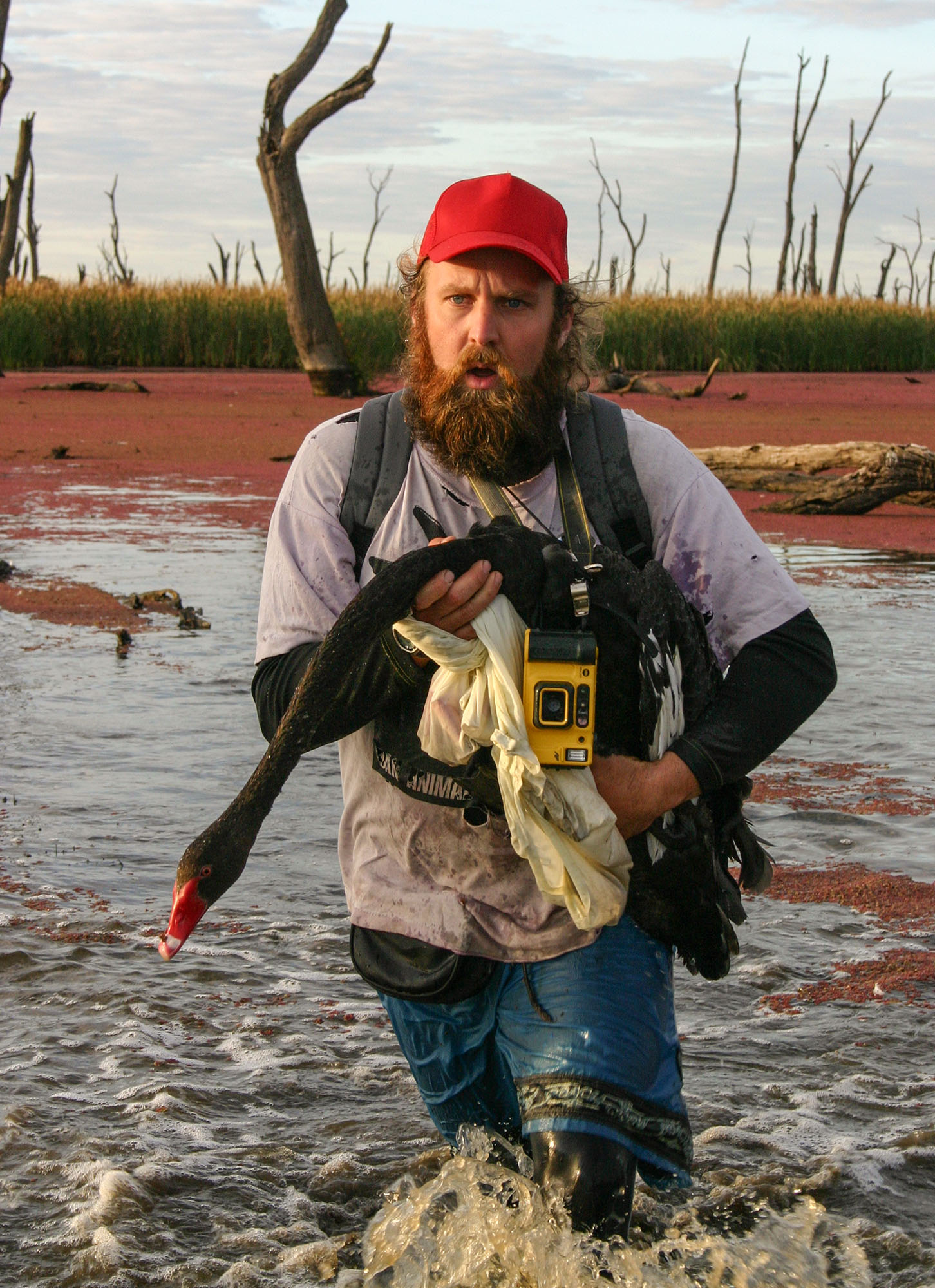 After a party of shooters watched as their dogs attacked and mauled this downed swan, Mark from the ALV rescue team ran in to rush her to veterinary care. Unfortunately the swan did not survive.

The quiet before the killing…

Some of the carnage from the 2006 duck opening, including a rare freckled duck and a ‘game’ bird abandoned by shooters dying in a rescuers arms

The fight goes on… 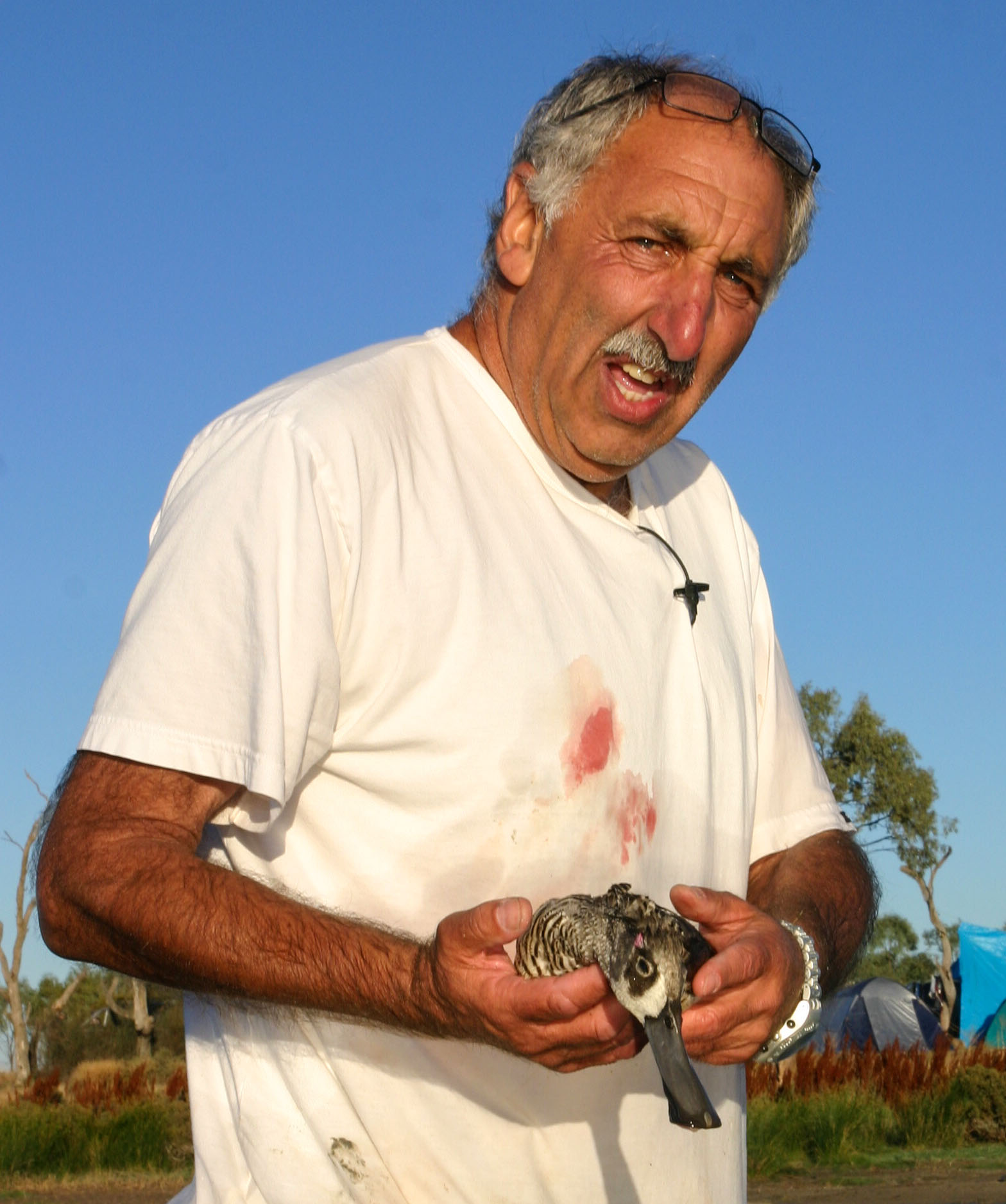 Wetland warrior Laurie Levy, who for 20 years has led the campaign against the barbarity of duck shooting.

“There will be no more duck and quail hunting in Queensland … It’s time to ban the recreational shooting of ducks and quail. This is not an appropriate activity in contemporary life in the Smart State.”
– Peter Beattie, Premier

The ALV rescue team out on the wetlands at the 2009 duck season opening.

Slaughter of the innocent 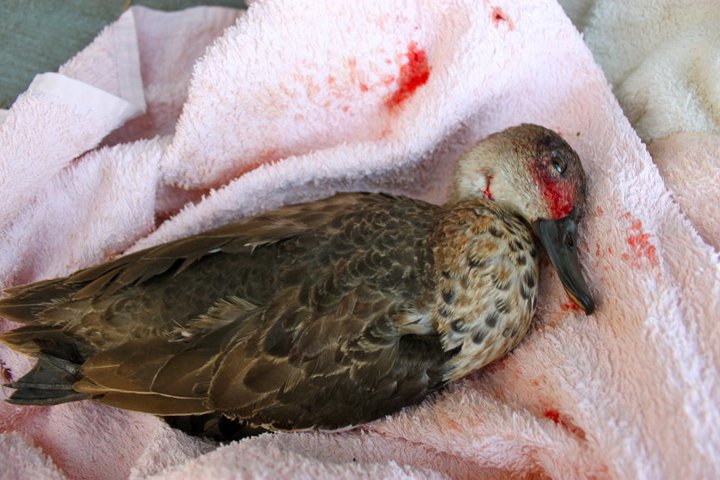 It is hard to understand how anyone could take pleasure in wounding, maiming and killing gentle birds.

Dead on the water

Hunters sometimes leave behind dead and dying birds on the wetlands, so that they can shoot more birds without going over their bag limit. We found one of the birds pictured here with a large bloody headwound, when we tried to get the duck to veterinary care the bird swam into reeds where we were unable to recover them, and where they likely died a slow painful death. 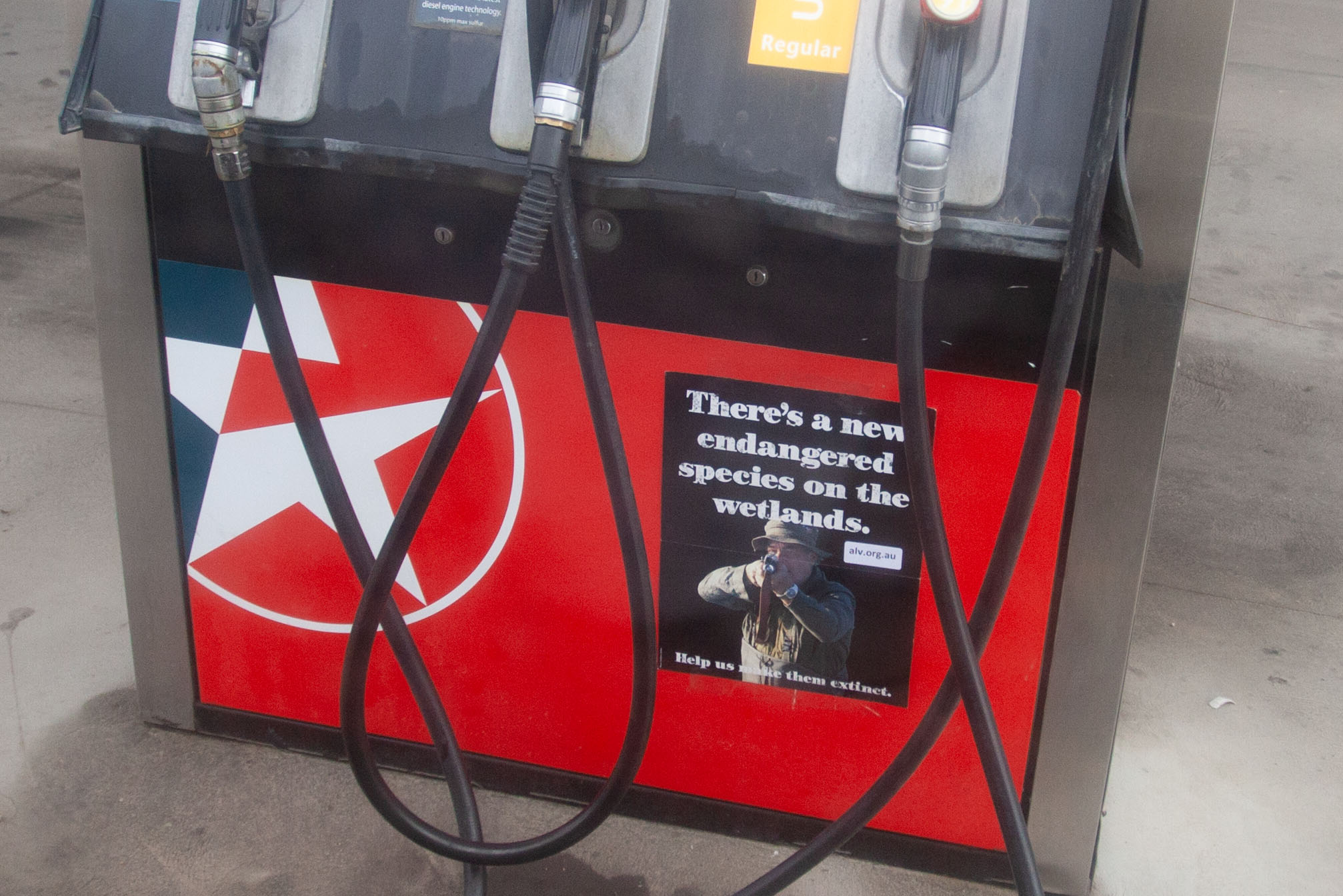 Death for no reason 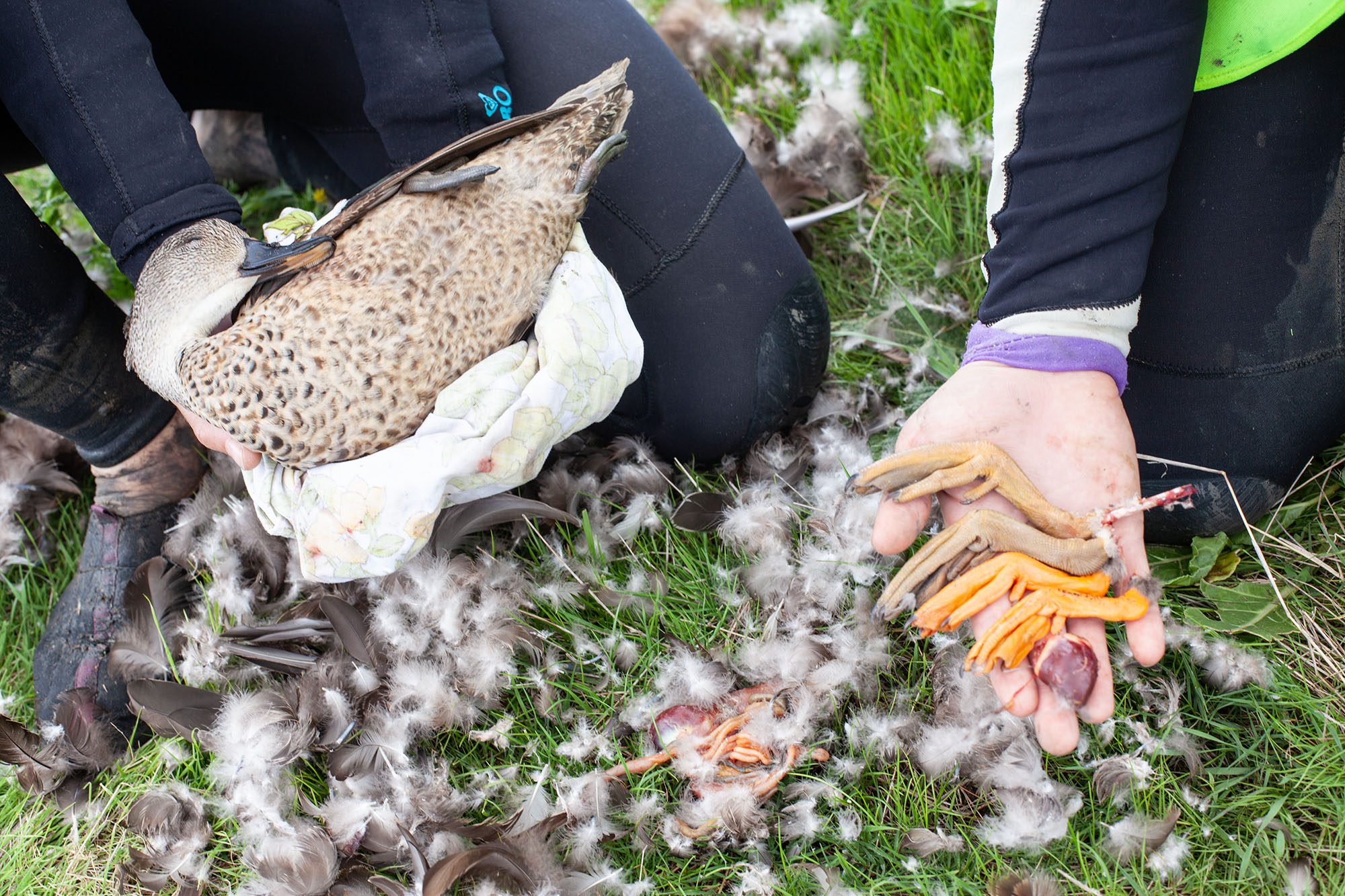 Some of the carnage left behind after the 2012 opening weekend 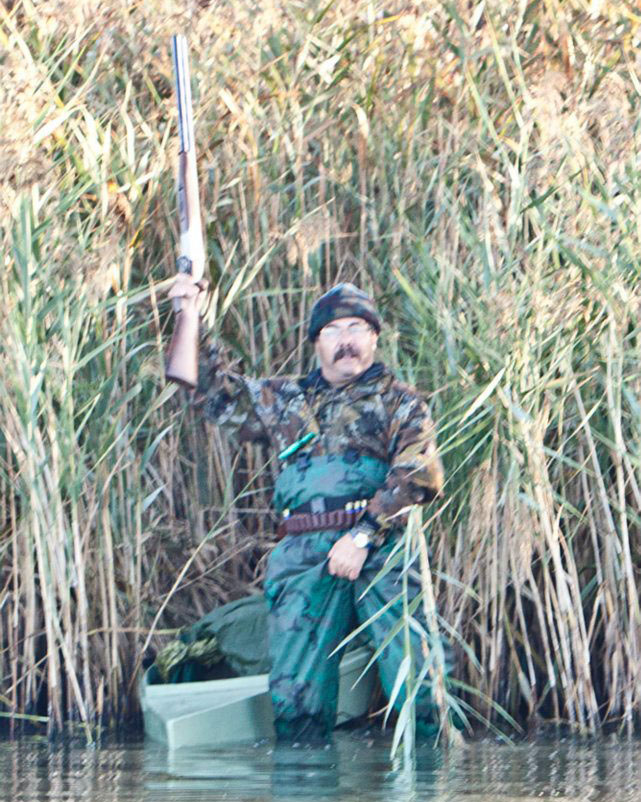 Another example of the sort of people they give gun licenses to. This duck shooter kept grabbing his crotch and waving his gun in the air.

A horrible way to die

A hunter at the opening of the 2013 duck season displays the severed head of a pink-eared duck who had just been blasted out of the sky. Another hunter had fired three times at the wounded bird on the water before picking him up and twisting his head off. 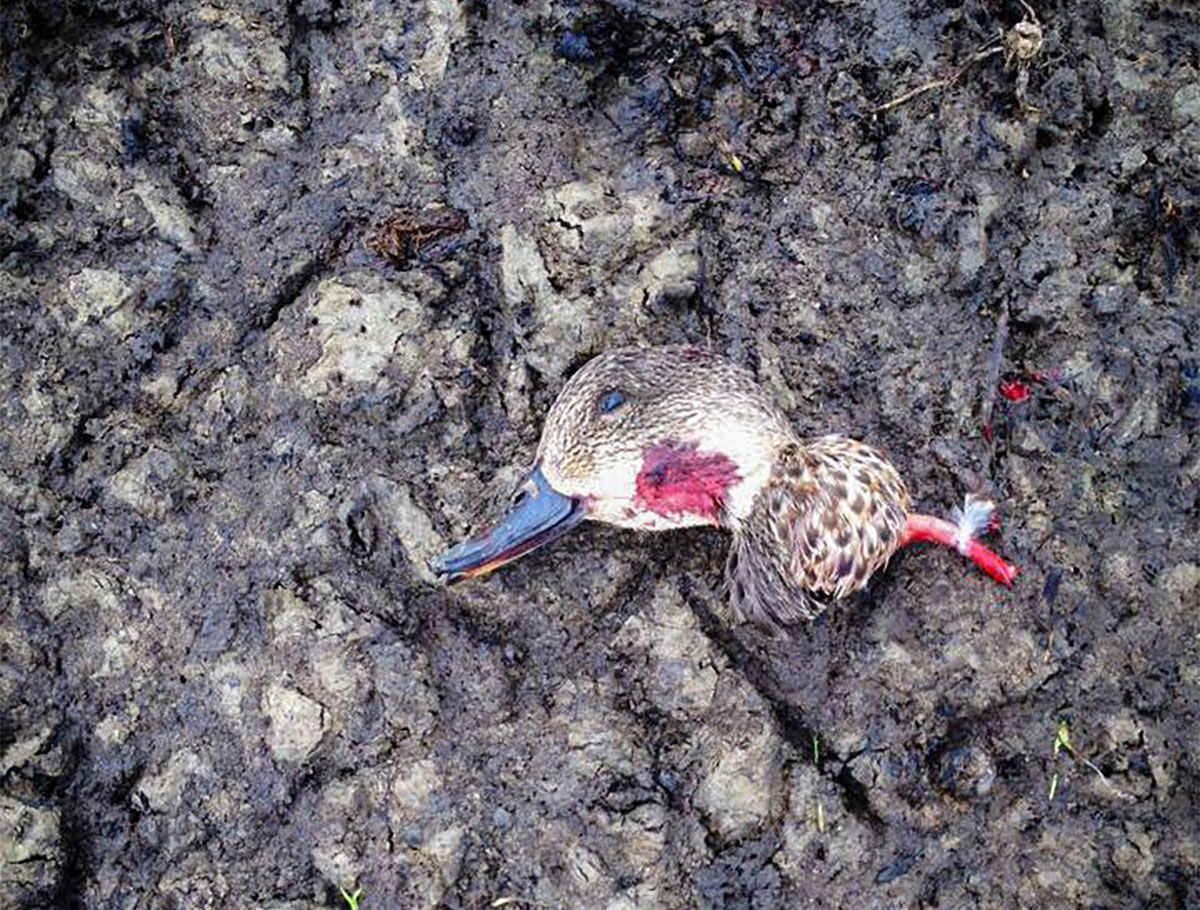 A hunter pulled this young duck’s head off while still alive and threw it at one of our animal rescuers. It’s time to take a stand against this cruel cowardly violence. 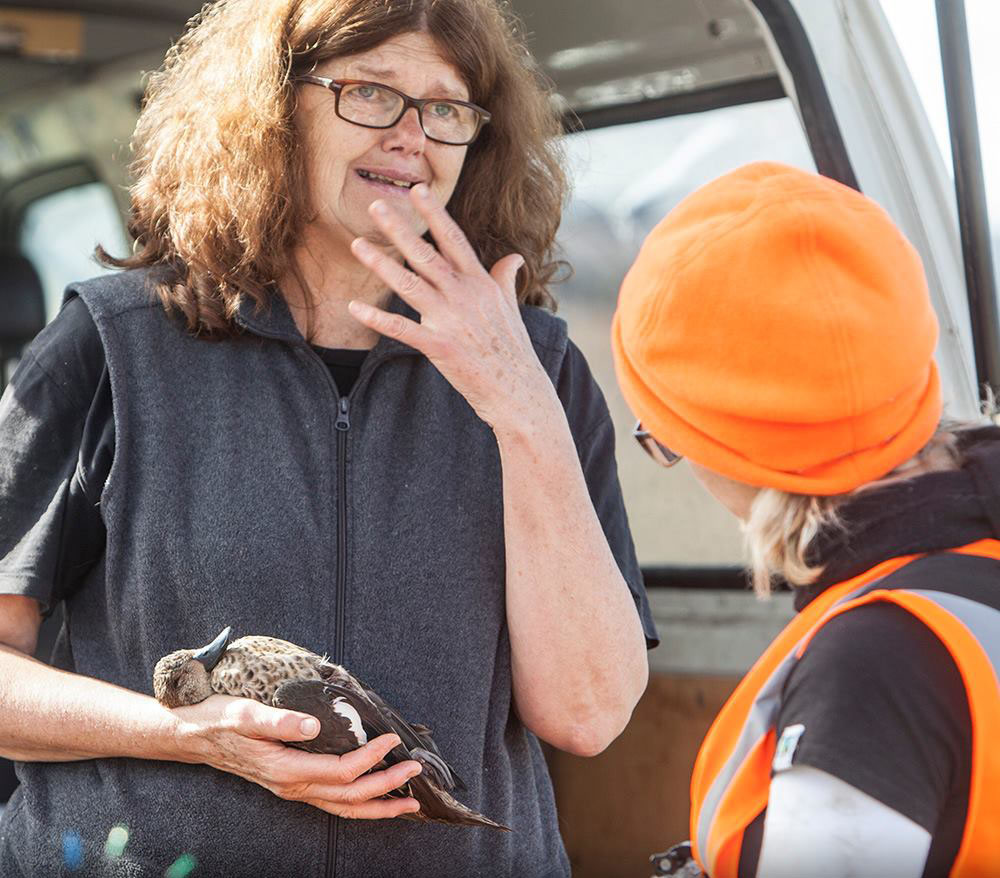 This chestnut teal was found by our rescue teams early Saturday morning, she had been blasted out of the sky and left unclaimed floating on open waters. We do not know how she died, but many birds are not killed instantly during duck season, they are carelessly left on the water, or disappear into reeds, and die agonising, long and painful deaths from shot gun pellet wounds, shock and drowning.

Hunters often talk about how much respect they have for the animals they kill. This is nothing but a cruel joke. They routinely make a mockery of their victims, often just to taunt rescuers. And there is nothing respectful about hiding in bushes and killing defenceless animals. 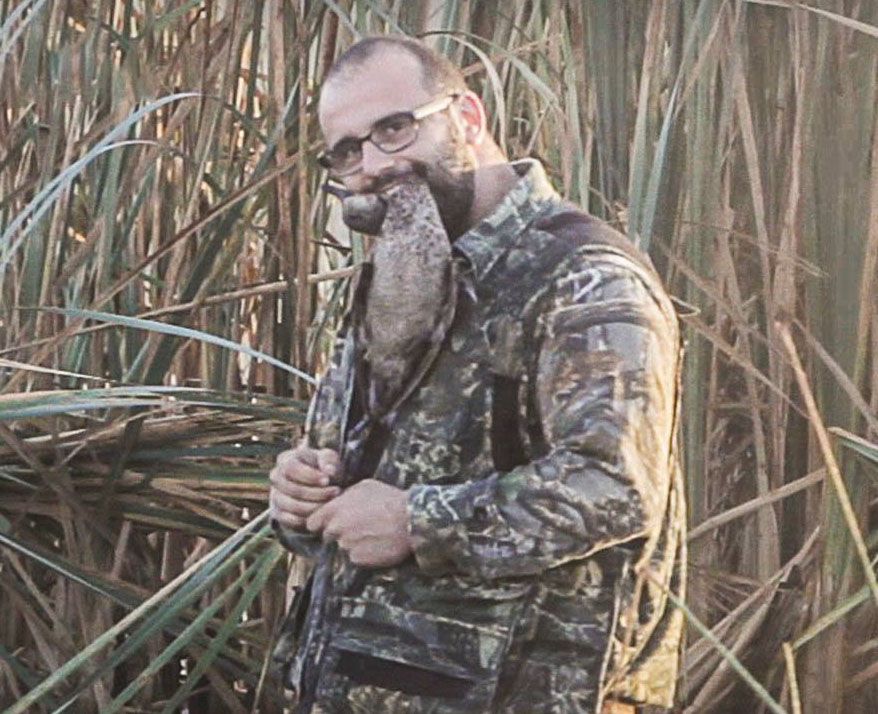 This hunter found it amusing to taunt ALV rescuers by biting into the neck of a duck he had killed, and then posing with the corpse hanging in his mouth.

Police were called to a Lismore lake by duck hunters who feared a confrontation with protesters on the weekend.
“Most departed from the lake not having shot a duck. I’m sure the ALV members considered it a successful day.” – Sergeant Laxton 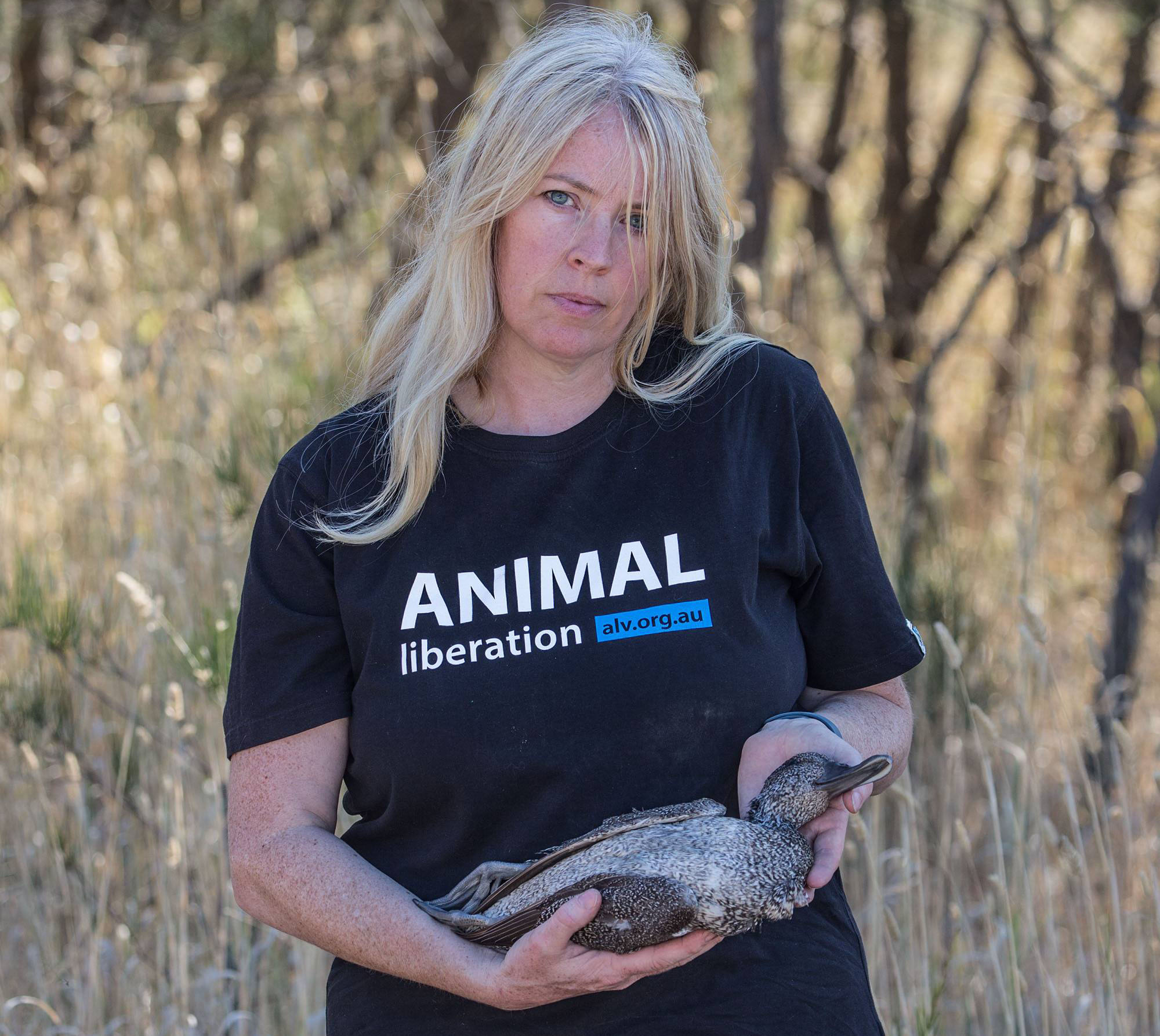 Our duck rescue coordinator Jo, after a traumatic opening day on the wetlands, holding a dead freckled duck who was abandoned in the water by a shooter who no doubt realised he had killed a rare and protected species. 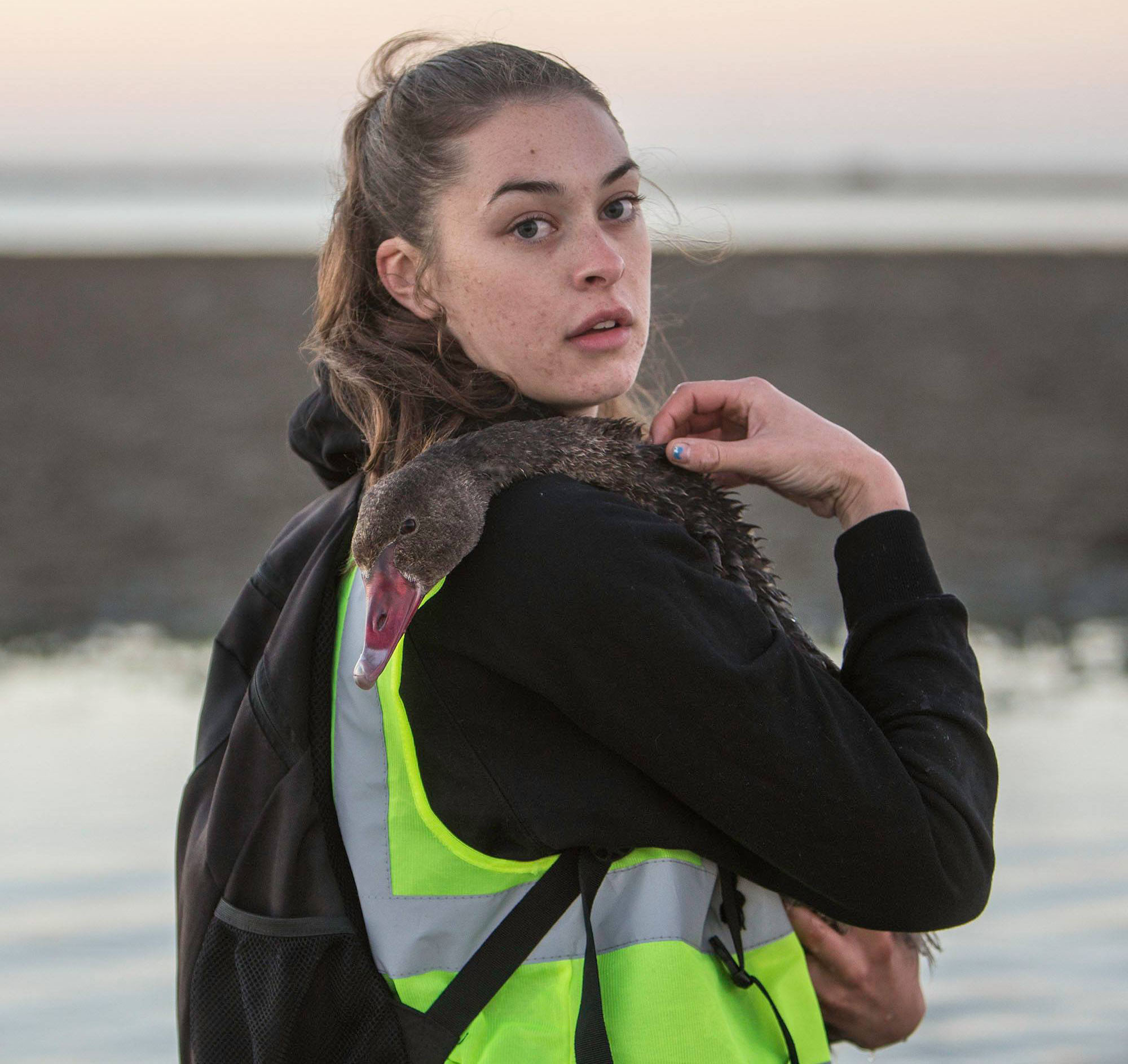 Our duck rescue team discovered this dying swan on opening weekend. Hunters had set up next to her, not to help but to use the dying bird as a living decoy, attracting more birds to the area that they could blast out of the sky. We intervened and carried the swan to our vet nurse, who eased her final moments with pain relief.

Animal Justice Party Senator Andy Meddick introduced a bill into parliament to permanently ban duck shooting in Victoria. While this is being considered it is crucial to let your Ministers know you support the ban.

The Victorian Government announced a 2020 duck shooting season. This inexcusable decision to green-light the cruel slaughter of waterbirds came at a critical time for wildlife, in the wake of drought, bushfires and already declining populations. Wetlands should be havens for wild birds recovering from the fires, not killing fields where they are slaughtered for fun. 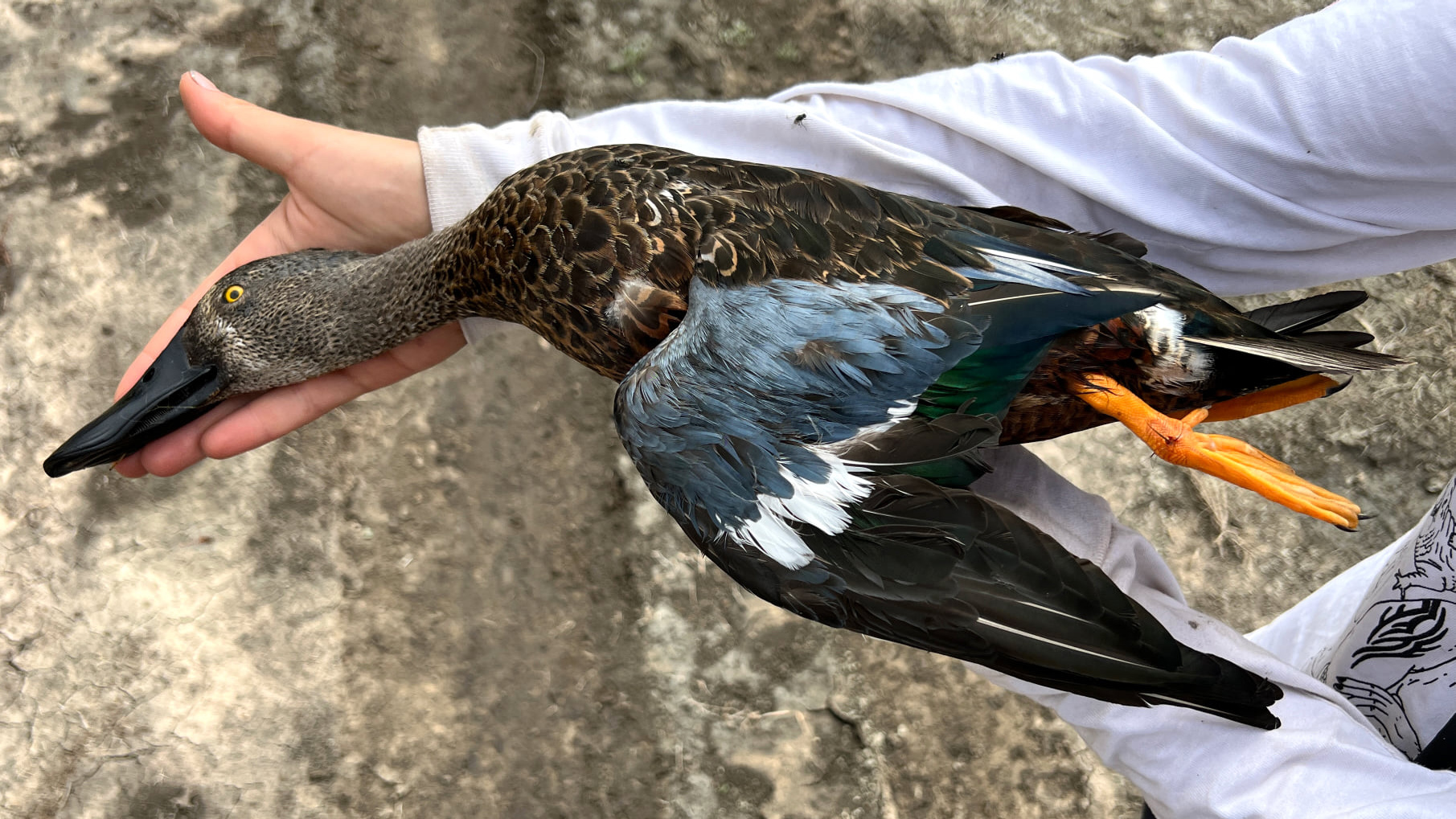 Coalition Against Duck Shooting members discovered 23 dead birds buried in a pit on the opening weekend of the duck hunting season. Shooters have exceeded bag limits and inhumanely dispatched birds – in one documented case, a shooter hit a native water bird and simply stuffed them into their bag while clearly still alive.

1 URGENT: Write to the Ministers

Write to the Premier and your local MP. If you need some inspiration see our petition to ban duck shooting, but please use your own words:

Your local MP
parliament.vic.gov.au/about/electorates
Find your local MP at the link above and contact them by district and region.

Show your support for an end to duck shooting by temporarily updating your Facebook profile picture with the overlay It’s Time – Ban Duck Shooting with the following text:

Please visit www.alv.org.au/ducks to take immediate action for the ducks

Please join over 75,000 others in taking a stand against the cruel cowardly violence of duck hunting – sign our petition to finally ban this bloodsport.

Note: The petition mentions 2020 but is an ongoing petition that is still relevant.