Animal rights activists chained themselves to a Victorian pig slaughterhouse 'gas chamber' on Monday morning to protest against carbon dioxide stunning in the pork industry.

Four protesters walked into Diamond Valley Pork Slaughterhouse in Laverton at about 2am, sneaking into the area where carbon dioxide (CO₂) is used to render a pig unconscious just before being slaughtered, and shut down the abattoir for hours before police moved in. 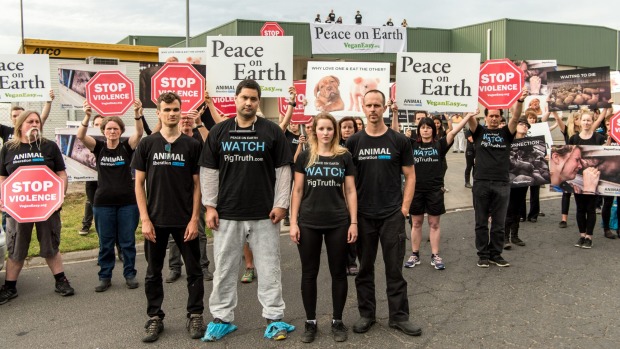 The protest coincides with footage released by Animal Liberation after activists secretly filmed pigs before they were killed. One activist climbed down into a ‘chamber’ while wearing an oxygen tank to position hidden cameras.

Vegan bodybuilder Noah Hannibal, 39, was among three men and one woman who had chained themselves to a metal run used to transport the pigs to the chamber. 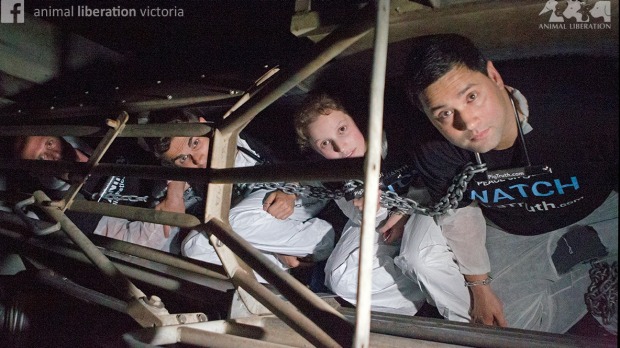 Mr Hannibal believes the group prevented any pigs from being taken to the chamber from when the slaughterhouse began operations at 4.30am to when they were removed by police at about 7.30am.

They had been “locked on” since about 2am, he said. “They cut us down one by one.”

Mr Hannibal said the group were advocating for a vegan lifestyle and that he believed there was no humane way to kill. “The average Australian doesn’t know about the horrors of the pig industry,” he said.

“Our purpose was to draw attention to the horrific animal abuse that happens inside gas chambers.

“We have released today a two-year undercover investigation … detailing the horrors of the industry. This is the standard way of killing pigs in Australia, they are killed with carbon dioxide and it burns their nose, their mouth, their lungs … they are literally burning to death from the inside out, it is a horrific death.”

A group of eight activists stationed on the roof of the facility came down shortly before 10am after peaceful negotiations with police, said Animal Liberation Victoria spokeswoman Kristin Leigh.

At about the same time a large contingent of police created a line that edged the activists on the ground away from the driveway of the facility, allowing a truck of live pigs to arrive, an emotional Ms Leigh said.

Activists had travelled from South Australia, New South Wales and Canberra to participate in the protest.

The investigation by Animal Liberation Victoria and its NSW counterpart was sparked two years ago when a whistleblower from the Laverton facility came forward, Ms Leigh said.

She said the majority of the footage has been supplied to the group anonymously and was captured over the past six months at facilities including Laverton.

“We want the world to wake up and stop taking part in cruelty to animals and cruelty to each other,” she said.

Animal Liberty Victoria founder Patty Mark said activists involved in today’s action had ‘taken a vow of non-violence’ with an aim to close down the slaughterhouse for as long as possible.

Australian Pork Limited’s Emily Mackintosh accused the activists of releasing “the sensationalist footage” ahead of Christmas to suppress pork sales.

“The industry is not surprised by the timing of this … it is our most profitable time of year,” she said.

Ms Mackintosh said footage inside an abattoir is never pleasant. “But the same could be said of a surgical operation unit inside a hospital as well.

“The stunning of animals with CO₂ prior to euthanasia is a global practice. It usually takes anywhere from eight to ten seconds for a pig to become unconscious. It’s a bit like humans having anesthetic.”

“The footage is designed to shock, upset people and encourage people to go vegan.”

Cootamundra Local Area Command had created a special strike force, named Shubach, to investigate a spate of piggery break-ins across the south of NSW.

By Daniella Miletic and Rania Spooner, The Age » Full Story