The hidden cruelty behind the goat milk industry...

This world first footage of the Australian goat dairy industry shows newborn goats being legally bludgeoned to death in front of their mothers.

Killing newborn males happens as part of an inherently cruel dairy industry, and as long as consumers buy dairy products, it will continue.

Why does this happen?

The dairy industry is much the same regardless of the species being exploited. Just like cows, female goats are repeatedly impregnated, as this is the only way they will produce milk.

Male goat kids are considered useless to the dairy industry, as they will never produce milk. It is industry standard that these kids are killed soon after they are born.

Many farms kill the newborn kids with a captive bolt gun shot through their brain. It is also legal for kids 24 hours old or less, to be killed by blunt force trauma. This means if a farmer uses a hammer, a metal pole, or a rock to bludgeon a newborn goat in the head, it is legal.

As part of our Goat Truth campaign we are encouraging companies to stop profiting from animal abuse and asking them to remove goat’s milk products from their range. 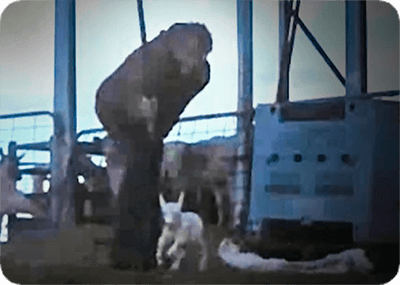 Encourage them to stop profiting from animal abuse by removing their goats milk products, and commit to never using dairy again.